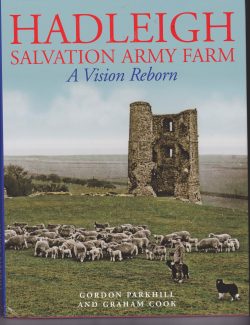 In 1891 William Booth bought 900 acres of farmland in South-East Essex in order to put into practice the vision expressed in his book, In Darkest England and the Way Out.  The Hadleigh Farm Colony gave hope, training and rewarding lives to many.  A century later,  sustainable development continued through the opening of the Training Centre.
The local 2012 Olympic event facilitated legacy investments such as the new Hub in Chapel Lane;  the tea rooms and mountain bike trails, all completed on the 125th anniversary of publication of Booth’s far-sighted book.

This is the revised and updated edition published July 2015 and is now available – using this link – from Essex100.