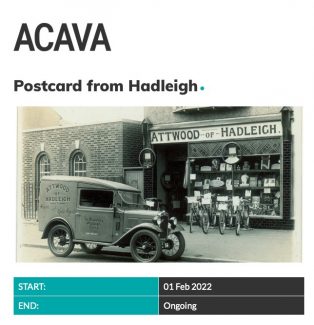 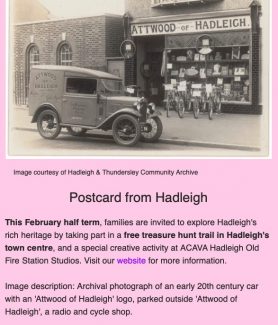 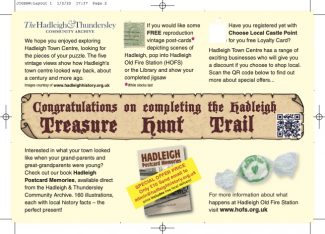 zoom
Linking the Artistic work at HOFS to the Archive 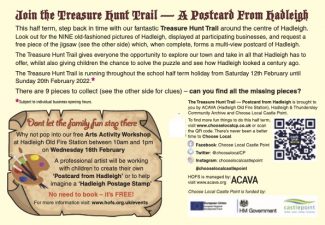 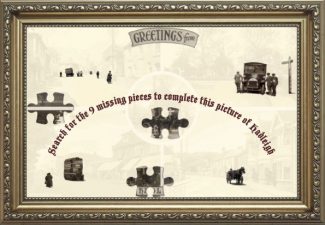 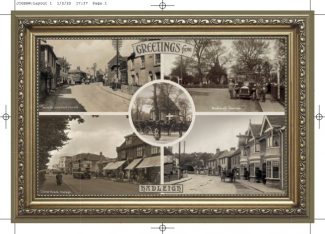 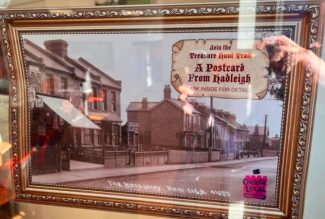 “Step back in time with our fantastic Treasure Hunt Trail around the centre of Hadleigh” was designed, developed and delivered by David Hurrell and with the support of Sue Willis of ACAVA and Sue Ryan of Castle Point Borough Council.

Children were invited to:
– search for nine old-fashioned pictures of Hadleigh displayed at participating businesses;
– request from those shops the specific free puzzle piece which, when all nine were collected,    — completed a specially designed multi-view postcard of Hadleigh.

The Treasure Hunt Trail gave everyone the opportunity to explore our town and take in the richly featured environment that Hadleigh has to offer, whilst also giving children the chance to solve the puzzle and see how Hadleigh looked a century ago.

The fun was extended with a FREE Arts Activity for children at Hadleigh Old Fire Station Wednesday 16th February 10am to 1pm, where local artist Alan Hockett helped the children to create their own unique ‘Postcards from Hadleigh’ or to imagine a ‘Hadleigh Postage Stamp.’

Details:
The Treasure Hunt Trail — Postcard from Hadleigh was brought to you by ACAVA (Hadleigh Old Fire Station), Hadleigh & Thundersley Community Archive and Choose Local Castle Point.
There was a special site set up for the half term, visit www.chooselocalcp.co.uk  which emphasised that after two years of adverse conditions, “There’s never been a better time to Choose Local.”

Postcard from Hadleigh was a collaborative project between Sue Willis of ACAVA, the Hadleigh & Thundersley Community Archive (based at ACAVA Hadleigh Old Fire Station Studios, Essex) and Sue Ryan of Castle Point Borough Council. The Treasure Hunt phase of the project was delivered during February half-term 2022.

Project Framework:
Every Hadleigh school child up to Year 6 was invited to step back in time to explore the town’s rich heritage. A Treasure Hunt Trail around the shops and businesses encouraged children and their families to discover how Hadleigh looked a century or more ago. A jigsaw piece could be collected from each participating shop or business and, when the nine-fold collection was completed, formed a specially designed multi-view postcard of Hadleigh in days gone by.

During the February half-term,  ACAVA artist Alan Hockett based at ACAVA’s Hadleigh Old Fire Station Studios delivered a workshop for children, responding to the heritage archive material, to create their own Postcard from Hadleigh or to help imagine a postage stamp for Hadleigh. In late March 2022, the work will form part of a mixed print and digital display, alongside the original archive images for Hadleigh Old Fire Station’s celebratory Community Day.

The HOFS website gave details and times for the events.

Despite the storms
In half-term week, Storm Franklin followed Storms Dudley and Eunice – the first time this has happened since the storm-naming system was introduced in 2015.  Following official safety and travel restrictions during the storms, many families  were unable to collect all of the jigsaw pieces during half-term week. However,  Saturday 19th February saw a drop-in facility created in Hadleigh Library to help make good the puzzle piece collections and provide sets of Prize Postcards to the children.  There were happy children (and families) and enhanced footfall around the Hadleigh shops and Library.