My visit to the women's mountain biking event 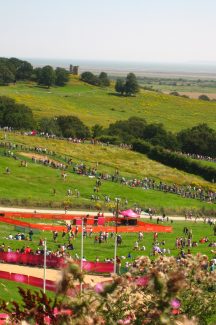 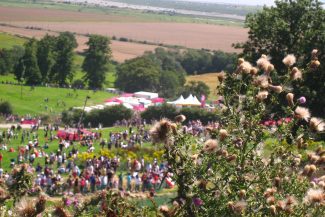 zoom
The view of the estuary
Chris Worpole 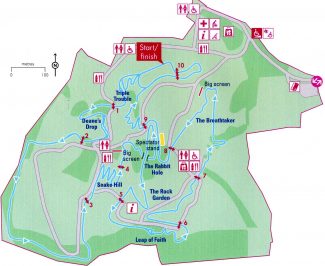 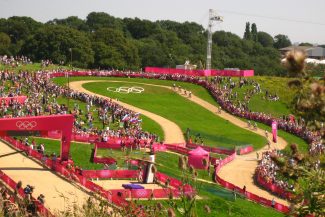 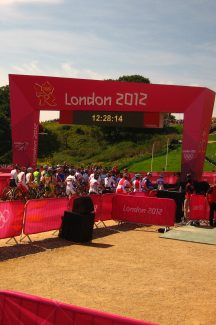 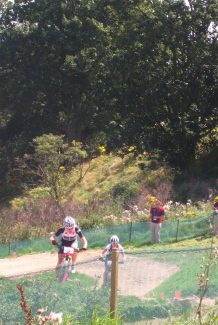 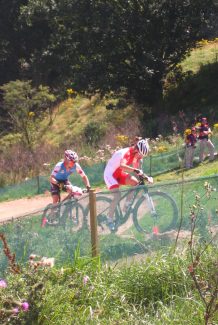 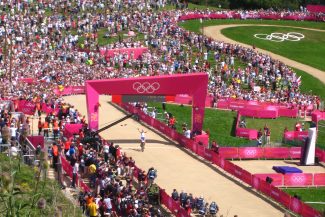 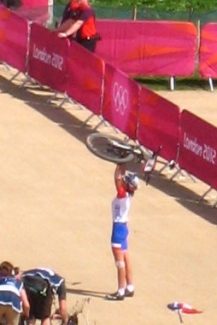 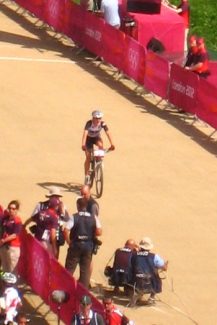 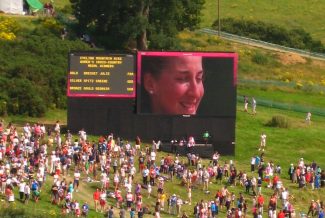 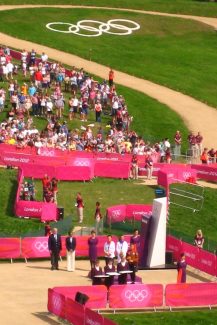 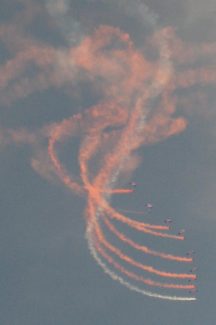 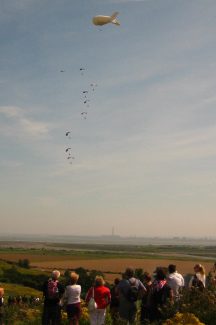 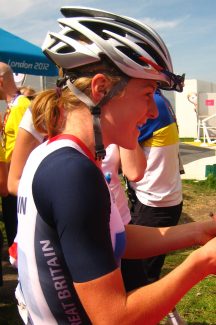 The London 2012 Olympics came to Hadleigh on Saturday 11th August with the women’s mountain biking event. I was one of the 20,000 lucky spectators at this event at Hadleigh Farm, described by Peter Walker of The Guardian as ‘surely the prettiest 2012 venue with its rolling view down to the Thames estuary’ (I agree Peter).

Mount Tamalpais in California is widely accepted as the birthplace of mountain biking. This extreme sport developed in the 1970s and now has a worldwide following.  Mountain biking is one of the newest Olympic sports and first featured in the 1996 Atlanta Games, with the first women’s gold medal winner being Paola Pezzo of Italy. The best British female finisher was Caroline Alexander who came twelfth in Sydney in 2000.

Annie Last, the only British competitor, is the first British cyclist to qualify in twelve years. From Bakewell in Derbyshire, she is 21 years old and is ranked fifth in the world.

Hadleigh Farm was confirmed in 2008 as the venue for the mountain biking events of the London 2012 Olympic Games. It is owned by the Salvation Army and run as an educational working farm, with a rare breeds centre and tea room for visitors. Castle Farm, Park Farm and Sayers Farm were purchased in 1891 by William Booth as part of a plan to rescue the destitute of London. This spectacular Olympic venue overlooks the Thames Estuary with views of Hadleigh Castle, which was built by Hubert de Burgh in the 1230s

Hadleigh Farm was chosen as the venue as it could provide a technically challenging course. Usually mountain biking events are held in forested areas, but Hadleigh Farm provides a new smaller style of course as it is on open hillside, providing excellent viewing for spectators.

·        Each lap measures 4.7 kilometres, with the first lap including an extra 441 metre long starting loop.

·        The course tests speed and endurance with steep climbs and technical descents. Competitors have several routes through certain sections with an easier route or a hard technical shorter route.

·        Local schools were given the chance to name certain areas of the course, such as The Rabbit Hole and Deane’s Drop.

Thirty women qualified for the event. There are no heats and all the competitors start together. The cyclists are seeded at the start of the race in three rows of ten cyclists. The first row includes the favourite Catherine Pendrel of Canada, Gunn-RitaDahle Flesjaa of Norway, Julie Bresset of France, Annie Last of Great Britain and Sabine Spitz of Germany, the current gold medal holder.

I stand near the start-line to watch the race start at 12.30 pm, although from this position I can only see the back of the cyclists! The crack of the gun sounds and the thirty cyclists seem to explode out of the start-line. Wanting to gain a better view of the course, I climb back up the hill and position myself under the line of flags near Triple Trouble. Although I can’t see the next part of the course, there’s a good view of the big screen.

The commentator excitedly informs us that Annie Last leads at the first bend. At the beginning of this lap, the cyclists complete a start-loop up the hill to the Olympic rings carved in the grass and down to the start-line again. This is to separate the field of cyclists before the first technical section. A few minutes into the race I watch the first fall of the race (on the big screen).

Deane’s Drop allows the cyclists to choose between a shorter technical section or the easier longer one. The course then takes the cyclists speeding through some trees and on to the longest and toughest uphill section lasting one and a quarter minutes.

About seven minutes into the race, the cyclists approach Snake Hill, with Annie Last in the lead. But a few seconds later she is overtaken by Julie Bresset. These sections of the track are very narrow and it is difficult for the cyclists to overtake on the steep climb.

The Leap of Faith resembles a cliff face, and it was amazing to watch the women bravely take that leap. As we stand under the flag of Namibia , my fellow spectators and I excitedly watch the big screen to see Annie Last once more in the lead. She and Julie Bresset are now clear of the rest of the field but, as they start climbing the steep Breathtaker, Canada’s world champion Catherine Pendrel catches them up.

At the end of the first lap, Julie Bresset is in the lead, closely followed by Annie Last and Catherine Pendrel.

We cheer as the lead cyclists climbed the steep hill to Triple Trouble again. Now Germany’s Sabine Spitz joins the leaders, and we marvel how she makes it seem effortless, even though she is one of the oldest cyclists in the race.

We ask each other where Annie Last is now and are disappointed to find she has dropped to fourth. By the end of the second lap, Julie Bresset  opens up her lead, followed by Sabine Spitz and Catherine Pendrel. Disappointedly, we see that Georgia Gould of the United States has overtaken Annie Last. Ten minutes later, Annie Last is fighting back. She is now at the front of the chase group who are eighteen seconds behind the leaders ~ Julie Bresset, Sabine Spitz and Georgia Gould.

But, at the halfway stage, Annie Last starts to slip back further. The cyclists have been out on this gruelling course for an hour now and, although there is a cool breeze from the sea, the sun is really hot. The cyclists are getting more dehydrated and, as they reach us at the top of the hill, we can see how challenging this course is. To encourage them, we wave our flags and give them a cheer.

Julie Bresset is now out in the lead, followed by Sabine Spitz, Georgia Gould and Irina Kalentieva of Russia. It looks as though the medals will now be between these four. Disappointingly, Annie Last continues to drop back and is now seventh.

Just after 2 pm, after an hour and a half, Julie Bresset crosses the finish-line to win the gold medal. After letting Annie Last set the pace in the first lap, she has dominated the race. As she approaches the line, she waves and blows kisses to the crowd. The two Frenchmen standing behind me go wild with excitement as she grabs a Tricolour and waves it as she finishes.  We watch in amazement as she lifts her bicycle above her head, not looking at all tired.

The defending Olympic champion, Sabine Spitz of Germany, takes silver and Georgia Gould of the United States takes bronze. Huge cheers greet Annie Last as she finishes eighth. Twenty-eight women finish the race (Gunn-Rita Dahle Flesjaa of Norway and Laura Valentina Abril Restrepo of Colombia do not complete the course). The crowd cheers loudly as Candice Neethling of South Africa is last to cross the line.

As I am walking to the exit, the commentator announces a display by the RAF Falcon parachute display team. It has been a wonderful afternoon ~ great sport, beautiful sunshine, magnificent views and friendly spectators. I am proud to live at Hadleigh and to have been part of this excellent Olympic Games.

But there is one last thrill. I see Annie Last signing autographs and I stop to speak to her. She is really friendly, a great ambassador for British sport, and she autographs my programme. I take one last photograph (of Last) and then walk home up Chapel Lane.

{Ed:  here is a link to the official video.}