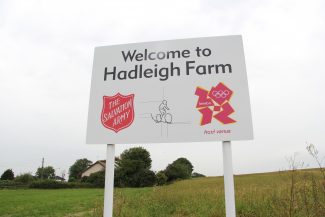 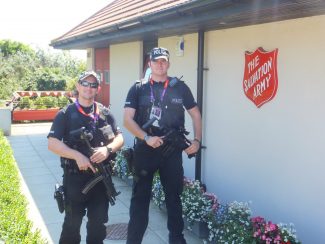 zoom
Security was tight at all Olympic Venues, Hadleigh Farm was no exception
Brian Nichols 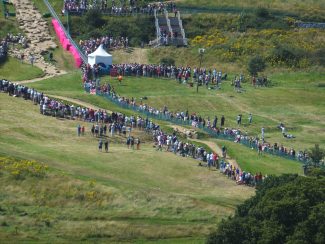 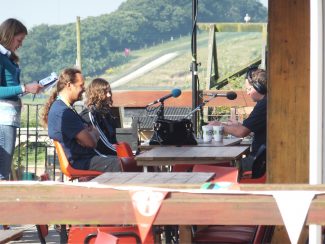 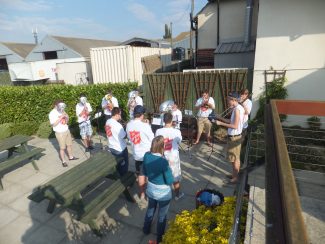 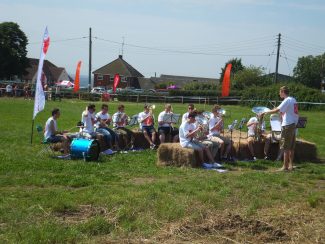 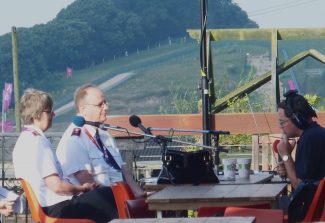 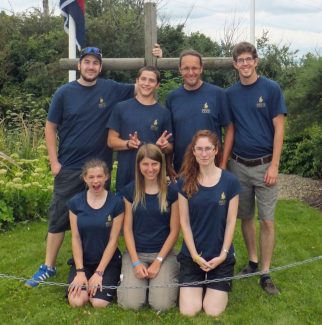 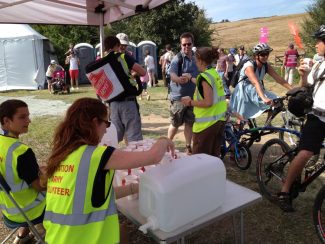 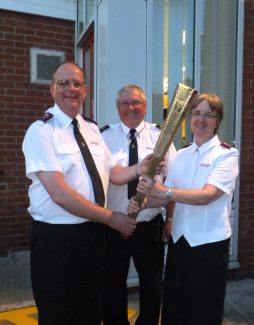 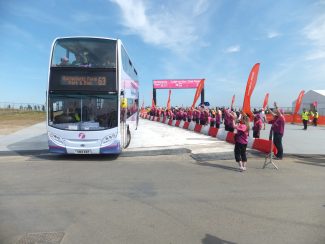 For the past couple of years ‘Hadleigh’ plus ‘The Salvation Army’ has added up to ‘Olympics’, because the London 2012 Mountain Bike event was scheduled to take place on the Army’s land at Hadleigh Farm. The event – on the last weekend of the Olympics – had a great impact on local Salvationists and those further afield, including the Swiss mission team who were allocated to Hadleigh Temple Corps for nine days.

In the week leading up to the event, the young Swiss team helped run the corps Champions’ Challenge holiday club, which attracted approximately thirty children. The youngsters enjoyed crafts, games and a plethora of other activities and when asked after the event what they liked best, they responded: ‘All of it!’

At the farm, the team also ran Lifelines – an extended ‘pause for thought’ for trainees at Hadleigh Training Centre.

Lieut-Colonel Ivor Telfer (THQ), chair of the Army’s Olympic Task Force, said: ‘London 2012 has been the best Olympics for The Salvation Army ever and anywhere – and that’s not counting an event being staged on Army land.’

The Mountain Bike event is the first Olympic event to be held on land owned by the Church. However, in being hosted by the Army, it came with a proviso: no alcohol to be served on the land. This decision attracted praise from the press, the local authority and police. The local populace, too, congratulated the Army on standing by its principles.

Prayers from around the world lifted the event, while, on site, for several months, Christians were attracted to the weekly joint Salvation Army and More than Gold prayer meeting – led by centre chaplain Major Neville Andrews and local More than Gold Co-ordinator Avril Betts-Brown.

The ambience at the Olympic event was very positive and friendly. ‘It’s really good here,’ one police officer commented. ‘The atmosphere is great and we are enjoying our work. People are so friendly and I’m really pleased we’ve not had to get into our riot gear.’

The training centre was transformed into a VIP reception. Providing great views over the course, the Army was able to say thank you to donors, supporters, local dignitaries and the press. A hit with visitors at last year’s test event, Salvation Army bands – Salvation Brass, Proclamation Youth Brass, Hadleigh Temple Band and a trombone group from Bromley Corps – witnessed through music.

Some 20,000 Olympics fans – relaxed, cheerful and bedecked in their country’s flags – were greeted and directed by Olympic Games Makers each day. As the roads to the farm were closed to the public, those who chose not to walk or cycle were bussed from two park-and-ride centres or Leigh-on-Sea station to a makeshift station in one of the fields. Visitors could also walk from the rail station through the farmland. The training centre’s public tearoom is close to the bus station and walking route. Staff catered to members of the public as well as at the VIP reception and people came to catch a glimpse of the course from the terrace or to watch TV coverage from the comfort of the centre’s sofas.

Meanwhile, the Swiss and centre chaplaincy teams engaged visitors or, on the approach to the venue, distributed water and special copies of The War Cry and Kids Alive! Many visitors were from overseas, so making contact was a challenge. Although, calling out ‘Good morning!’ in a variety of languages was a useful tactic.

A major boost to the Army’s publicity was the live broadcast of BBC Essex’s Sunday Breakfast programme from the training centre. There were seven interviews with members of The Salvation Army and staff, including territorial leaders Commissioners André and Silvia Cox, and Colonel Telfer presented the Sunday morning reflection.

The concluding community songs of praise at Hadleigh Temple, which included the screening of the Closing Ceremony and a free buffet, attracted a full hall. The Swiss mission team, who led the previous Sunday evening meeting, featured strongly in the celebration. Two members showed their unusual gifts being used for God – Jérôme Grandet demonstrated beatbox and Sylvain Ramseier, a student circus performer, presented an acrobatic routine on suspended straps.

Olympic Torchbearer Bandsman John Willson shared how he had turned down huge sums of money for his torch because he believes it belongs to the community. A similar story was told by Salvationist Torchbearer Ian Richards (Worthing) who participated in the 1980 Olympics. He describes that time as ‘a turning point’ – an impetus to do more for sports evangelism. He prays the Hadleigh Olympic event will be a similar turning point for the people of the town.

‘There will be new mission and fundraising opportunities too. A new building will comprise a restaurant staffed by training centre trainees, mission offices providing opportunities for gap-year students and a family intervention and counselling centre. Trainees will be given employment opportunities at the new venue.’

The enthusiasm of the Swiss mission team and their willingness to turn their hand to anything with full commitment has set the bar high. Their legacy to the corps is an impetus to do more.

Corps officer Major David Woodman concludes: ‘The corps has responded positively to the buzz of excitement of the Olympics. The profile of the Army and Hadleigh Temple has been raised and our comfortable routines have been challenged. God has done a new thing in our midst and we have glimpsed the possibilities for even more.’

This article first appeared in the Salvation Army weekly paper ‘Salvationist’ on 1st September 2012. I am grateful to Major Stephen Poxton, Editor, for permission granted to the Hadleigh & Thundersley Community Archive Group to publish this on our website. (Graham Cook.)