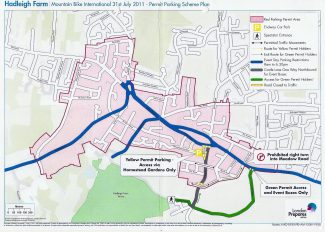 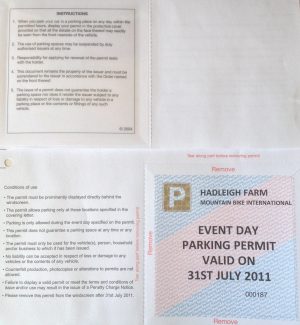 Five years ago the Olympics came to Hadleigh,  and there is much to celebrate as the legacy continues with the very successful cycling Hub at the end of Chapel Lane.

Already by 2017, some of the key web-sites which supported the games no longer show anything about the event or the considerable amount of planning that went into making it a success.

A year before the Olympic event at Hadleigh, there was a trial event – Mountain Bike International 31st July 2011.   To the right is the parking plan for 2011,  and a related permit.

Attached is the Hadleigh Farm Newsletter of December 2011 which summarised the outcomes of the trial event, whilst also looking forward to the Olympic Torch Relay.