The Olympic Torch Comes To Hadleigh

On the afternoon of Friday 6th July 2012, the Olympic Torch will be carried through Hadleigh. 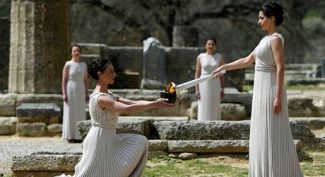 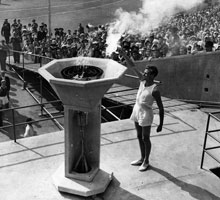 zoom
Lighting the Olympic Flame at the 1948 Olympic Games
www.london2012.com/games/olympic-torch-relay/history/ 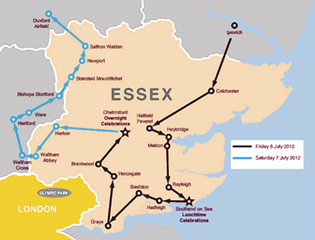 zoom
Map of the Olympic Torch Relay through Essex
www.essexlegacy.org/celebrations/torch-relay/

zoom
The 2012 Olympic torch relay will travel to 17 Essex towns and villages
www.bbc.co.uk/news/uk-england-essex-15519691 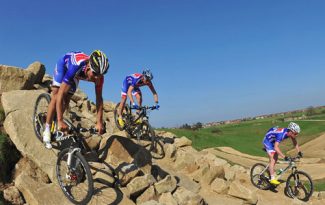 The Olympic Flame or Torch is a symbol of the Olympic Games, originating at the ancient Olympic Games held at Olympia, Greece, from the 8th century BC to the 4th century AD. A sacred flame burned continually on the altar of the goddess Hera. At the same time, heralds were summoned to travel throughout Greece to announce the Games.

The triangular-shaped gold-coloured torch, designed by Londoners Edward Barber and Jay Osgerby, has 8,000 perforated circles and is 800mm tall.

The design contains several symbolic influences. A series of ‘threes’ inspired the three sides of the torch:

The aluminium torch is perforated by 8,000 circles representing the 8,000 Torchbearers who will carry the Olympic Flame. The gold colour symbolises the qualities of the Olympic Flame – the brightness and the warmth of the light that it shines.

The Olympic Flame is lit from the sun’s rays at the Temple of Hera in Olympia, in a traditional ceremony among the ruins of the ancient Olympic Games. After a short relay around Greece, the Flame will be handed over to London at a ceremony at Athens.

The Olympic Torch Relay will start at Land’s End on Saturday 19th May 2012. The Flame will then visit more than 1,000 cities, towns and villages in the UK– as well as Dublin in Ireland– before it starts its London leg on Saturday 21st July. It will then arrive in the Olympic Stadium on Friday 27th July as part of the Olympic Games Opening Ceremony.

The Olympic Torch will arrive at Hadleigh at 1.49 p.m. from Leigh-on-Sea. It will be carried along the London Road and the High Street, and will then turn down Chapel Lane towards the Olympic Mountain Biking Course at Hadleigh Farm. At 2.30 p.m. it will be transported by bicycle around the Hadleigh Farm Mountain Bike Course. Returning along Chapel Lane, the Olympic Torch will be carried to Victoria House Roundabout where it will turn down Rayleigh Road. It will then be transported by convoy from Hadleigh to Basildon.

The Mountain Bike Events at Hadleigh

The Mountain Bike events at London 2012 take place at Hadleigh Farm over the weekend of 11th-12th August, the final two days of the Olympic Games. Mountain biking is one of the newest Olympic sports and requires both technical skill and physical endurance. The first Olympic mountain bike races took place at the Atlanta Games in 1996.

Hadleigh Farm is owned by the Salvation Army. The venue covers a 550-acre site including grassland and woodland. It also includes the surrounding countryside of Hadleigh Castle Country Park. The course is set against the backdrop of the 13th century ruins of Hadleigh Castle.

Construction of the Mountain Bike course was completed in March 2011. In July 2011 the Hadleigh Farm Mountain Bike International took place as part of the London Prepares series. Following this test event, which featured 82 athletes, several changes have been made to increase the technical difficulty of the course.

I have my ticket for the Saturday event, so see you there!