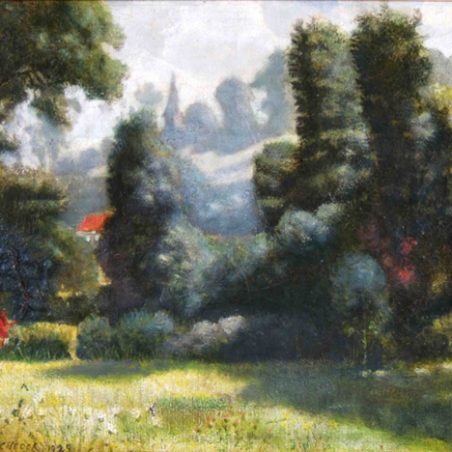 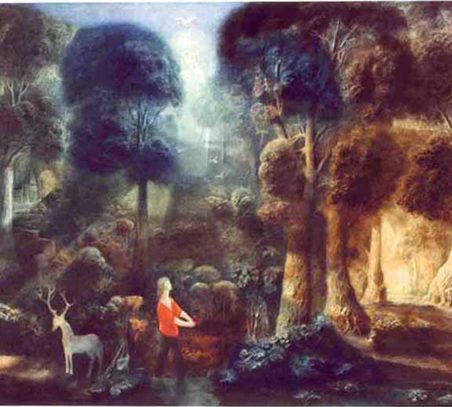 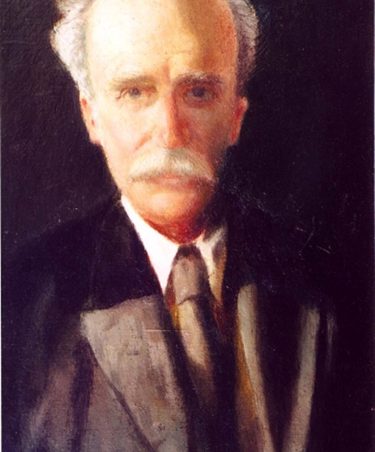 ‘When I was a child I was staying with my grandfather in a little village… called Thundersley. It was a very rural area. My grandfather had a long garden, and at the bottom of it there was a row of very tall trees – elm trees. I happened to be up early one morning, and I saw the sunlight shining right through the foliage of the trees. I remember the rays of light were spraying out, creating a sense of depth in the trees and the surrounding area, and glinting on the bark of trees, giving them an almost jewel-like quality. I’ll always remember the effect it had on me… it was a very uplifting feeling, and it remained with me throughout my life. This experience was the germ of it all. It drove me to become a painter, because I wanted to capture that atmosphere, that vision of light…’

Harold Hitchcock did become a painter. His work hangs in famous galleries like the Hunterian Museum, Glasgow and the Victoria and Albert Museum, in London, but he has exhibited since 1948 and not only in London, but in Paris, Nice, and all over the USA, which became his main market.

His maternal grandparents Fanny (née Stubbs) and Arthur Davis, a retired schoolteacher from London’s East End, had moved to Thundersley, where the young Harold visited them at age nine and begged to be allowed to stay rather than return to London. The Davis’s lived at ‘Laburnhams’, Kents Hill Road (surely that must be Kents Hill Road North, New Thundersley?). Is it still there? Perhaps we ought to put up a plaque in his memory.

Young Raymond (he adopted the name ‘Harold’ later in 1962) was encouraged to paint by his grandfather and with the blood of the animal painter George Stubbs in his veins, he was soon hailed a child prodigy.

He painted St Peter’s church on its height of ’Thundersley’ in 1929. Another work called ‘Vale of Thundersley’ paints an impression of his childhood experience. It depicts children and flowers, a grazing animal, a hay cart and of course trees bathed in glorious warm light – a rosy metaphor for a time of happy innocence, a feeling the artist could never shake off – or never wanted to shake off.

He returned to that earlier scene again and here I quote Michael McNay of The Guardian on Sunday 16 August 2009: ‘…By 1978 the back garden has become a forest with unearthly light trapped in a glade between towering trees; in the foreground is a white hart that might have stepped straight out of the Wilton Diptych and a young boy carrying blood-red blossoms, a symbol, maybe, of the blood of Christ that could be explained by the dove hovering at the top of the picture above a patch of mist-inflected light which appears to resolve itself into a ghostly apparition of Christ.’ That enigmatic ‘Thundersley’ hangs in the Yale Centre For British Arts, USA.

His son Leonard confirmed that the artist ‘often talked about Thundersley in later life with great love and affection’. While he stayed in Thundersley, the boy, his brother Ronnie and sister Iris went to the local school, which he later described as ‘Dickensian’. There were no electricity, mains water, or made-up roads then, and the doctor used to make his rounds with a horse and carriage.

The beloved elms were lost to Dutch Elm Disease in the late 1960s. But the elms that so spectacularly passed the dawn light at the bottom of Harold Hitchcock’s grandfather’s garden in (New) Thundersley and inspired the nine-year-old boy to become ‘a painter of light’ had found their champion and they live on in the imagination of everyone who discovers, peruses and admires his work.

The Vale of Thundersley