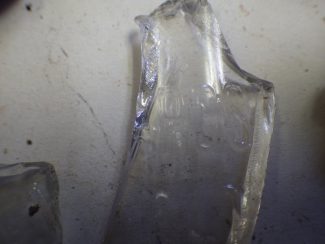 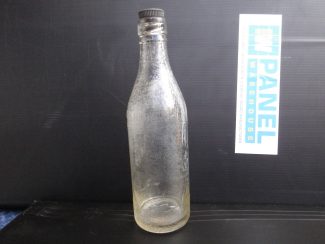 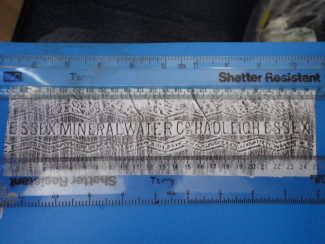 In May 2015, AGES AHA unearthed a quantity of broken bottle glass from a test pit in the front garden of the United Reformed Church in Church Road. The glass had a very definite embossed pattern and appeared to include the embossed word, “Hadleigh”.

When compared with a whole bottle from a local collection, this confirmed that it had once contained mineral water, apparently from a local spring. It is assumed that the broken bottle would originally have had a similar screw top rubber stopper.

A rubbing of the embossed label clearly showed the company name.

Subsequent research has revealed only one local mineral spring. In “The Mineral Waters and Medicinal Springs of Essex” (Miller Christy and May Thresher), a Dr Laver of Colchester refers to a mineral “well” (spring) being on the farm of the two Woodard brothers. The book published in about 1910, refers to Dr Laver’s visit being about 50 years beforehand ie in about 1850-1860.

Dr Laver described the location of “The South Benfleet Spring” as being at the base of a small cliff of London clay at or below the edge of the valley down a lane leading from the middle of the common (now Chapel Lane) in a line from Hadleigh castle to Benfleet. By 1910, the cliff was said to be constantly slipping and the spring probably could no longer be found.

The well was said by Dr Laver to be “very small” and “merely a drizzle”. “I remember well the flavour”, which he said was strongly impregnated with “sulphate of soda”. “Among my school friends, there were many who drank some of the water” and “they then used to get purgings from it”. He also said that it tasted like “Glauber’s Salt”. One of the Woodards told him that it would purge the horses if they drank from it.

Research has confirmed both Woodard brothers were at Sayers Farm in 1841 and 1847, but Daniel was no longer there by 1851, so the doctor’s visit was probably pre 1851.

Internal screw stoppers were invented in the 1870s and used more widely from the mid 1880s.

Therefore, it has been concluded that this spring water could have been later sold as a cure for constipation for a short period in bottles such as the one found, until a further landslip closed the spring.

The Victorians could not all afford a visit from the doctor and made use of any homecures that they could find. If the family used it, it did not seem to significantly shorten the life of Elizabeth Woodard as she lived until she was 73, although she was blind by the age of 62!

Whether such a patent medicine would pass today’s tests is another matter.