Famous Southend store had a draper's shop in Hadleigh 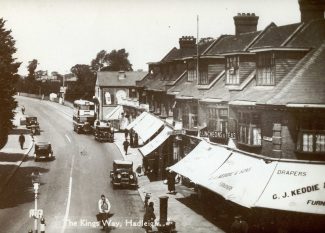 With the opening of the bypass in 1924 (now the London Road from the Old Fire Station to Rectory Road), more businesses opened in Hadleigh. In the mid-1920s, a draper’s store opened on a prominent position on the corner with Rectory Road – G. J. Keddie and Sons (now a branch of Santander).

George James Keddie was born in March 1855 at Hintlesham in Suffolk. At the age of 16, he was living at Auchtermuchty in Scotland, working as a draper’s apprentice for his uncle, John Keddie. Eight years later, he had returned to Suffolk where he married Laura Fletcher in 1879. By 1881, George Keddie was working as a draper at Braintree in Essex. In 1892, George Keddie opened his draper’s store at 144-146 High Street, Southend.

George James Keddie died on 5th February 1921, aged 65. In his will he left assets worth £41,875 12s. 4d. to his three sons Arthur Maitland Fletcher Keddie, Frederick Wallace Keddie and George Douglas Fletcher Keddie. As well as the store in Southend High Street, the Keddie sons opened smaller stores at Hadleigh and Leigh. By the late 1920s, Keddie’s drapery store on Central Parade, Hadleigh had a telephone, with the number 58364. The Hadleigh store closed in about 1946-7, after about twenty years trading in Hadleigh. The premises were then occupied by a draper’s shop owned by the London Co-operative Society Ltd.