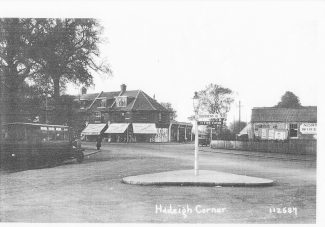 During a 2012 interview, Mr Pearce looked at this picture of the triangular island and recalls the fairly large 10’ or 12’ long, six-sided shed which was on this spot in his younger days.  It was where you used to wait for the buses. You sat on seats inside, looking out towards the buses.  The finger post signs in this picture were on its roof.   Buses included, Eastern National dark green 2, 2A; the light-green Benfleet buses e.g. the 3 to Benfleet and 22 to Hullbridge down Rectory Road and the 24.

Later, the Southend Corporation Bus number 1, in distinctive blue and cream livery, which followed today’s route, via Kiln Road, Kenneth Road and  Thundersley to Rayleigh,  where it changed its number to 7 or 8 and completed its journey back to Southend through the country route.

Imagine getting off the bus in the picture, at the start of the High Street, on the same side as St James the Less. There are shops where in 2011 a pathway runs to the southeast and south of St James.

The first shop was the Good Companions café,  cream painted with its name in green writing; it is always busy!   Though narrow, it goes back a fair way.  Through the front door, we pass the pin-ball machine on the right, to the left is the counter, where we pick up our breakfast or dinner and cup of tea from the large tea urns.   Later in the day, the tea starts to taste “stewed” as it has been heated from early morning.  We carry it all through to eat at the tables in the back, both to the left after the counter, and to the right after the pin-ball machine.

Next to the Good Companions, there is a space for bikes, then a wool shop and further west is a second-hand shop nicknamed Popeye’s;  and further still the Post Office.
We can swing around and look behind the sign post to the North West, where we see the famous Keddies on the corner of Rectory Road.

To the right of Rectory Road is the garage offering a wireless department, likely to stretch to replacement accumulators (heavy lead-acid batteries used to power radios where no mains electricity was available) and then to the right we would have seen Hair & Son the estate agents,  the National Provincial Bank,  big open space, Westminster Bank and then Mence Smith sticking out on the corner,

Next came terraced cottages retaining at this time their front gardens, then Ross shoe repairs,  the dual hairdressing salon;  to the right was Emery the men’s barber, and inside the same shop to the left was lady’s hairdressing.   Then a gap for deliveries,  Ward’s photographers, the pictures being taken in the big shed at the back.  Mr Pearce points out his copy of the picture taken there, of his mother, him and his sister during the war.

Further west comes the Ray Rippon cycle shop,  Greens Stores the general grocers where Persil was sold in small boxes for 6d or big boxes for 9d.  After the open space for the delivery yard comes Albany cleaners then more terraced cottages and then a men’s clothing shop.