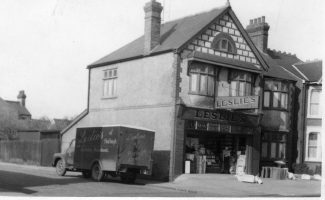 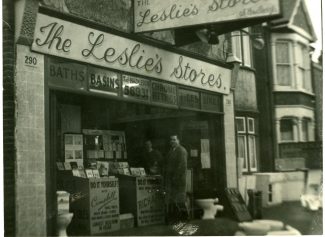 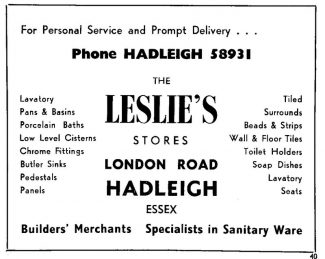 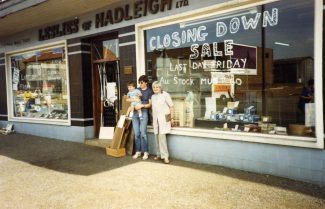 zoom
Leslie's of Hadleigh the day it closed 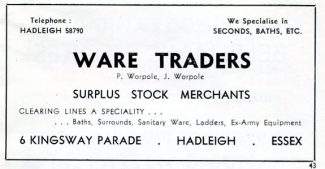 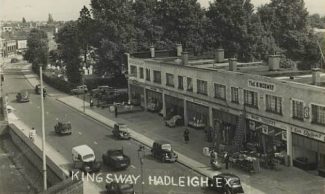 Leslie’s Stores opened in about 1951 and was owned by my grandfather Jack Worpole, who owned another business in Leytonstone Road, Stratford, called Leslie’s of Stratford. After my grandfather’s death in 1957, my father had his own shop built on the other side of the road (the building is now owned by Essex Carpets and Flooring). All three stores were builders’ merchants supplying sanitary ware, tiles, paint and Yorkshire fittings for plumbing. The advertisement for the original store dates from 1953.

My father died on 7 June 1962 and my mother Margaret, who was always known to her customers as ‘Mrs. Leslie’ continued to run the store, even though she had two young daughters – myself and my younger sister Gill. In the 1960s she was helped in the store by a manager, Mike Forshaw, and a young assistant, Roger. Eventually, she ran the store all on her own, with help from my sister on Saturdays. People in Hadleigh still reminisce about my Mum and have fond memories of her. In 1987, at the age of seventy-one, she decided to retire. The photograph of her with my sister Gill with her one-year-old son Tim was taken on 14 August 1987, the day the shop closed. Mum enjoyed her retirement for another sixteen years and was a devoted grandmother to her two grandsons.

Two other members of the Worpole family also traded at Hadleigh in the 1950s – Percy Worpole, who was my grandfather’s elder brother, and his son John. As can be seen from the advertisement, they sold sanitary ware seconds at Ware Traders at 6 Kingsway Parade (now Moore’s Shoe Repairs, 206 London Road). Incidentally, there are still Worpoles working as builders’ merchants – my cousins John and Bob Worpole, who took over Leslie’s of Stratford following my uncle George’s death.