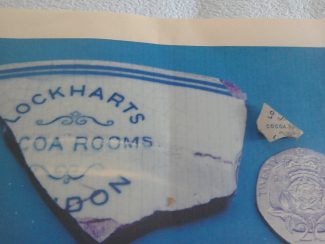 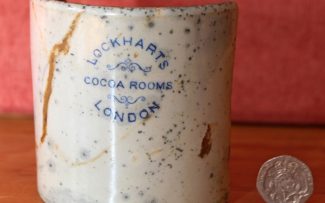 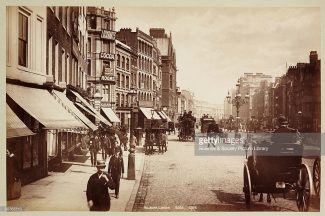 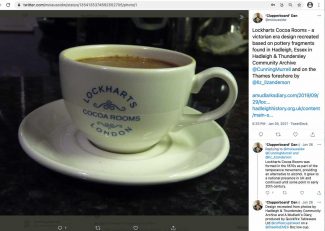 In the course of this year’s Cambridge University test pit exercise in Hadleigh the AGES AHA test pit in the grounds of Hadleigh URC unearthed this fragment of what appears to be a teacup sized vessel. Internet searches reveal that the logo is that of Lockharts Cocoa Rooms, part of the mid-late Victorian project of providing alternative, tea-total, social meeting places to the public house. After some early, not too successful, attempts Lockharts Cocoa Rooms emerged, offering a pleasant, hygenic environment and a good beverage, and eventually opening large premises in major towns and cities acros the UK. Clearly they no longer function but I could not discover when they ceased to operate.

The larger piece, that confirms the identification, is labelled on the internet as from Tom Licence’s ‘What the Victorians Threw away’ and is also linked to Hadleigh. The large, coarser vessel, to capture the entire logo, was perhaps for those who went in for the ‘workmans size’!

Was there such an estabishment in this area or by what means did these pieces get here – as whole vessels or already broken in landfill ?

This London branch of Lockharts Cocoa Rooms was the nearest I could find.

[In March 2021, Cunning Murrell received a tweet from @liz-lizanderson of amudlarksdiary.com containing a photo of a recreated whole Cocoa Rooms cup. Her blog at https://amudlarksdiary.com/blog/ is a must read for anyone interested in what has been found in the Thames – Ed]