You are here: HomenextMain SubjectsnextBusinessesnextSustainable crafts: Basket making in Hadleigh 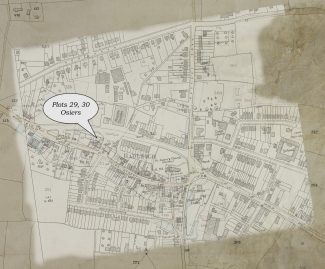 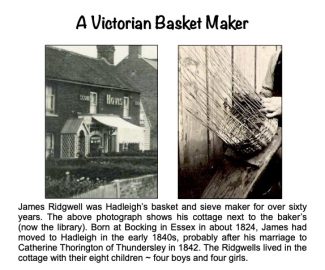 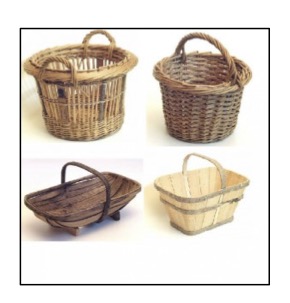 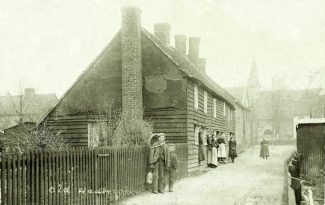 zoom
Murrell's weatherboarded cottage was nearest the church.
Thanks to Malcolm Brown
Where once the Ridgewells lived and worked

Click on the first picture for a magnified view. Osiers are visible on the left, behind Crown Terrace; the terrace of houses that used to stand in the High Street where Hadleigh Library is currently (2021) situated. Perhaps someone was still making baskets locally in the early 1950s.   Several osier beds are recorded in Hadleigh & Thundersley on the Tithe Awards of 1847 and 1838 respectively.

On the map, we see numbers 29 and 30 . These relate to two small plots of land directly behind the houses as well as the houses and their gardens. In 1847 Alfred Tyrell (also owner of Blossoms) owned the whole terrace of four separate dwellings also known as Crown Cottages.

The occupier of 29 was George Lloyd,  baker.  Plot 30 is where the basket makers, the Ridgewells lived.  Little preparation is needed to grow osiers;  cuttings are pushed into the right sort of ground in spring and they just grow.

Willow is an important energy crop because it grows quickly and will re-grow annually after being cut (coppiced).  It is attractive to wildlife and – as we now realise – also helps to capture carbon in the soil. Rather helpfully, using willow for baskets is also a way of sequestering carbon to help reduce greenhouse gases and combat climate change.

Willow or ‘osier’ rods are also called ‘withies’.  The W B Yeats poem “Down by the Salley Gardens” references the use by basket-makers like James Ridgewell of the long flexible shoots (withies) resulting from coppicing the common willow or osier (Salix Viminalis) also known as “sallow” or saileach in Irish.   The Ridgewell family were the basket makers of Hadleigh for decades, always living in Crown Terrace.
The basket makers and the bakers lived in the two houses nearest to the Crown pub. Both occupations were thirsty work!

James Ridgewell was born at Bocking in Essex and moved to Hadleigh in the early 1840s, probably after his marriage to Catherine Thorington of Thundersley in 1842. The Ridgewells lived in the cottage with their eight children ~ four boys and four girls.   James would have been an important craftsman in the village as he supplied the wicker containers used in both farms and homes.

Fruit and vegetables were gathered from the fields into baskets; fish, poultry and dairy produce were all packed into wicker for the journey to Rochford market. Jobs requiring the transport of bulky materials such as manure or rubble needed baskets, and rural items such as animal muzzles, bird traps and beer strainers were made of willow.   James Ridgewell continued working as the basket and sieve maker for the village until his death on 16th October 1906, aged 84 years. All four of James and Catherine’s sons ~ Walter, James, Lewis and Alfred ~ became basket makers.

The 1851 census gives more information about the Ridgewell family.

The last picture shows Endway, where one of the cottages was home to Cunning Murrell.   Note the empty, woven withies basket slung across the chest and shoulder of the man on the left.