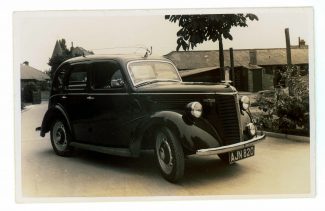 David Hurrell writes: During the course of designing and picture-researching for Robert Hallmann’s soon to be published history book, Thundersley & Daws Heath, I came across this picture in an old Wiggins’ Family photo album. I quizzed my friend Gwyneth Craze, author of “Wiggins the Builder” about its significance. She wrote back to me as follows:

…No, David, I really don’t mind you pestering me for information – it keeps my brain going! So, the car is an Austin 8 which my father (Cyril Wiggins) used during the War when petrol rationing came in, because it did not use as much as his rather larger Vauxhall car. One of my childhood passions was remembering car numbers, and so I recognised AJN 820. There was a time I could have told you the numbers of all the lorries as well.

We did not have a vehicle entrance to Chatsworth (the Wiggins’ family home in Hart Road, opposite Raymonds Farm – the pointed tower is just visible in the photo) so our cars were parked in the garages at the top of Raymonds Farm driveway. It maybe they took a picture of it because they had just acquired it.

Dad had a petrol allowance for business as well as one because he was a Minister of Religion, and we would go with him when we could for a trip out. For instance, Wiggins had an office in Romford for War damage work and in those days wages in cash had to be delivered in person by one of the Wiggins men – and there was a good market in Romford where you could buy stuff not available locally.

It was quite a while after the war before new cars were available, and the poor old Austin was not comfortable to ride in by then, the seats were worn and one at the front had a petrol can underneath it to hold it up. Fred Horner kept the mechanical parts going, sometimes manufacturing bits himself – he was a genius with anything like that.

No, not too much at all, Gwyneth. What a brilliant answer to my question, “Can you identify this car?”. Your response deserves to be recorded on the Community Archive – with your permission, of course.
David