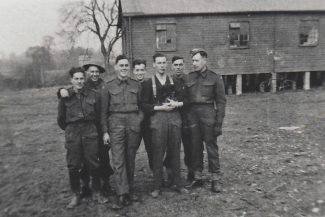 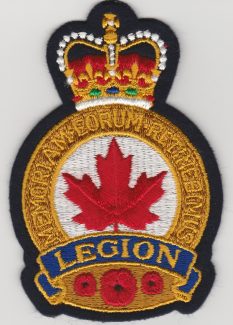 Can anyone confirm the location of the barracks or any other information on this Canadian Regiment at Hadleigh?

As a result of the first publication of this article in 2018. the following information was received from Major Ian Davidson Newby CD, SSM, Canadian Army (retired), Aldergrove, British Columbia) who is in contact with the Royal Canadian Artillery regarding their Heavy Anti-Aircraft site located on the Salvation Army Grounds during WW2.

His family, the  Olliffes, lived in Quetta House and Corner House, where they owned a grocery and a post office. His grandfather, Frederick Victor Olliffe, died in 1939 of ill heath brought on by his service as Colour Sergeant in the Queen Victoria Rifles, London Battalion, in WW1. He is buried in Sutton Road Cemetery.
[Frederick  Olliffe, aged 52,  was a grocer and sub-postmaster at Corner House, London Road, Hadleigh, in the 1939 Register – Ed].
His grandmother, Susan Elizabeth Olliffe (nee Miller) hailed from Lambeth. She was a nurse’s assistant at Netley Hospital in WW1 which is presumably where she met his Grandfather?
His aunt, Wendy (Marion) Olliffe married a Canadian soldier, Gunner Harold (Kirk) Kirkpatrick from the Hadleigh site and after the war moved to Haliburton, Ontario as a war bride. She is still going strong (in 2020) at 96!
His mother, Stella Marie Olliffe married a Scottish soldier, Francis Davidson Mills, of the Gordon Highlanders who had been sent south from Aberdeen to guard the “shipyards near Hadleigh” since there was fear of a German invasion. She is now 94 and quite well.
Ian was born at Rochford Hospital on January 20th 1944 and christened at St Barnabas in the former Church, now a hall.
Ian has visited Hadleigh many times, most recently in May 2019 when Veteran’s Affairs Canada sent his wife and him to Normandy for the 75th anniversary of D-Day. (Ian and others provided all the uniforms and equipment for the official Canadian video that was produced for D-Day; it can be viewed on YouTube under Canadian Historic Moments and is the story of Major Archie MacNaughton of the Northshore New Brunswick Regiment). [See https://www.youtube.com/watch?v=-AuKXAftIts – Ed]
Ian’s grandmother took the young Canadian soldiers under her wing and gave them a home away from home. She referred to them as “her boys” and they called her “Aunt Sue”. In 1950 several of the former members of 11th Heavy Anti-Aircraft Battery, 1st Canadian HAA Regiment, invited his grandmother to travel to Canada and visit them in their homes across that vast country.
She stayed with the Sedman family in a tiny village named  Brookswood south of Langley Prairie in British Columbia ((Sergeant Frank H. Sedman), and brought back to Essex a glowing account of life in Canada.
In 1953 Mr. Sedman had become a Canadian Immigration Officer and offered to sponsor their family to move to Canada. At that time they had moved to 82 St Benet’s Road in Prittlewell, where Ian attended St Mary’s school and was a Wolf Cub in the 1st Prittlewell Pack.
They crossed the Atlantic in a very stormy October and landed in Wolfe’s Cove, Quebec on October 23rd, 1953. Their family has done very well in Canada, and Ian served with the Royal Canadian Artillery for 28 years as a means of repaying their debt to Canada.
Ian will be back in Hadleigh ere long and looks forward to meeting with the Archive members.

By Graham Cook (with additional information by Ian Newby)