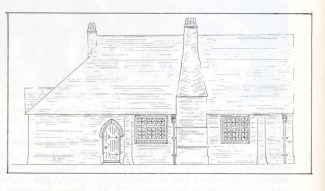 In 1855 the first day school was built in Hadleigh. It was a national school founded by the National Society for Promoting Religious Education. These schools provided elementary education, in accordance with the teaching of the Church of England, to the children of the poor. The Society was founded on 16th October 1811 and its mission was to found a Church school in every parish in England and Wales.

The school was built on a plot of old common land given by the lady of the manor, Lady Olivia Sparrow. The school ~ including fittings, equipment and furniture ~ cost £450 to build, financed in part by an endowment by Mrs. Martha Lovibond of Hadleigh House (later Victoria House).  The daughter of Sir Elijah Impey, Chief Justice of Bengal 1774-89, she married George Lovibond esq. in 1793. In 1820 Martha Lovibond gave £750 (worth £31,440 in 2010) for the education and clothing of the poor children of Hadleigh.

The school building still stands in Hadleigh today as an example of George Edmund Street’s genius as a Victorian Gothic architect.

The first mistress at the school was Anne Houseley, born in 1828 at Edensor in Derbyshire. At the time of the 1851 census, she was working as a school mistress at Neswick Hall in Yorkshire. In 1861 Anne Houseley resigned from her post, four years later marrying John William Crake, a grammar school teacher. Anne and John had three children, but John died in 1872. In 1878 Anne married the Reverend John Godson, who worked as a curate in Chester. In the 1860s Godson had been the curate at Hadleigh and had regularly taught at the National School there. Anne died in 1918, at the age of 90. She had been living at Bromley College in Kent, a charitable institution for the widows of clergymen.

Anne Houseley had been assisted by Miss Mary Lloyd, born at Hadleigh in 1841, the daughter of George Lloyd, the village baker. At the time of the 1861 census, Mary Lloyd was the mistress at the school, assisted by 16 year old pupil teacher Eliza Pepper, the daughter of James Pepper, the village hurdle maker. Miss Cecilia Miller, born in 1839 at Ramsgate in Kent, became the teacher after the death of Mary Lloyd. In 1863 William Kingswood became the school’s first master.

By 1867 Henry Yeaxlee was the school master, aided at first by his sister Mary Yeaxlee and then his wife Lavinia. Henry ~ the son of William Yeaxlee, a carver and gilder ~ was born in 1843 at Staines in Middlesex. In 1869 Henry married Lavinia Harvey, who was a local girl from Eastwood. Whilst living and working in Hadleigh, Henry and Lavinia had three children, two of whom ~ Edith and Margaret ~ would also become teachers. Their son Henry Arthur Wellesley Yeaxlee would return to Hadleigh at the turn of the century and open a draper’s shop in the High Street. In 1875 Henry and his family left Hadleigh after ten years, and he spent the rest of his teaching career in London. He died at the age of 85 in 1929. As well as his two oldest children, at least two more of his children ~ Albert and Lucy ~ became teachers.

The next school master was Alfred Hawks who was to remain at the school until December 1918, becoming the longest serving master at the school. Alfred was born in 1854 at Snodland in Kent, where his father Henry was the licensed victualler at ‘The Rising Sun’. In 1871, at the age of 17, Alfred was working as a pupil teacher at Snodland. In 1875 he married Sarah Dulton, whose occupation in 1871 was also as a teacher at Snodland. Alfred and Sarah moved to Hadleigh in 1875, where they brought up their family of five daughters and three sons. At least three of the daughters ~ Alice, Minnie and Kate worked as assistant school teachers at their father’s school. Alfred retired in 1918, at the age of 64, dying in Kent in 1943.

The Kelly’s Directories for this period give information as to the name of the mistresses in charge of the infants section. In 1886 this was Miss Emma Bell, but by 1890 she had been replaced by Miss Bragg.

By 1895 Alfred Hawks’ wife Sarah was employed as the Infants Mistress, but in 1902 her daughter Kate Beatrice was in charge of the Infants section. By 1906 Miss Ethel Andrews was the new Infants Mistress, a post she held until at least 1917. Ethel was born in 1887 at Cheshunt in Hertfordshire.

The Kelly’s Directories also provide other information about the school. The school was originally built for 100 children. In 1895 it was enlarged to cater for 155 children. This was due to the purchase of land by the Salvation Army to form a colony. It was enlarged again in 1909 for a capacity of 162 children, although by this time a new council school was being built in Church Road.

In 1918 Alfred Hawks retired after 43 years as headmaster of the school. He died in 1943 aged 90 years. Mr. Cecil Edward Buck became the school master at the church school. Born in 1893 at Beccles in Suffolk, Cecil Buck was the son of a journalist and in 1911, at the age of 17, was working as a pupil teacher. The Kelly’s Directory for 1922 records that Miss Ada Batsford was the Infants Mistress.

In April 1924 the school was merged with the public elementary council school. The building became the parish hall until it was converted to the Sandcastles Nursery in 2000.