Teacher thrown from a cart! 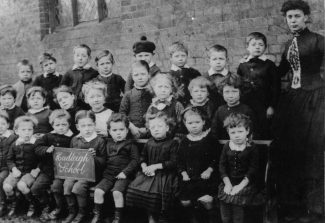 zoom
Emma Bell with her infant class in c.1889

For the last 18 months I have been reading the log book of Hadleigh National School (1855-1924) in preparation for writing a book, Tales out of School, which was published by the Hadleigh and Thundersley Community Archive in March 2014. From 1863 the master or mistress of a school receiving government grants was obliged by law to keep a log book. This was a daily record of events that occurred, including inspectors’ visits, weather, school closures, sickness and bad behaviour.

Some of the events mentioned in the log book are more unusual than others. The event this article is about comes from the log book of Hadleigh National School on 24 February 1888:

“Miss Bell met with an accident on Tuesday on her way home – she was thrown from a cart and is likely to be laid up some time.”

Miss Emma Bell had become the infant teacher at the school on 21 June 1878. She was employed as an assistant teacher, which meant that she had not attended a teacher training college. Instead, she would have worked as a pupil teacher after the age of thirteen, completing a five year apprenticeship in teaching and learning. As Emma Bell is recorded on the 1871 census as being a ‘scholar’, we know for certain that she attended Hadleigh National School as a pupil, and probably served her apprenticeship at the school.

Born in the village of Hadleigh in 1857, Emma Jane Bell was the daughter of Joseph and Ann Bell, who lived in various cottages on the main village street (now the High Street and the London Road). At the time of her birth her father was employed as an agricultural labourer.

By 1881 Joseph Bell had become the foreman at a magazine where gunpowder was stored and, in the 1880s, the family moved to Benfleet High Street. As this now meant a daily journey to work of two miles up a steep hill, Emma Bell travelled to and from school in a cart. This was probably a dog cart, which was a cart with two large wheels and back to back seats, pulled by a horse or pony. The cart was so named because originally it had a box compartment to carry dogs as well.

Miss Bell continued to teach at the school until 11 April 1890. Still living with her parents in South Benfleet, she continued to work as a school teacher. At the time of the 1891 census, a 26-year-old railway porter, Charles Butcher, was lodging with the family. Seventeen years later, on 2 March 1908, Emma and Charles married at Park Road Wesleyan Chapel in Southend. Charles Butcher had now been promoted from a railway porter to a signalman. After their marriage they lived at a house called Belle Vue in Benfleet High Street.

{Ed: If you would like to know more about Emma Bell’s career at the National School, copies of Tales out of School with its extensive index, can be obtained from  Craft & Copy Shop and Hadleigh Library (Hadleigh,) Ann’s Mini-Mart (Daws Heath) and The Book Inn (Leigh-on-Sea) and is available as an e-book; click here for a link to the e-book site.}