For a few years in the early 1900s the Farm Colony had its own school. 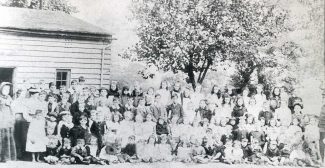 In 1891, the Salvation Army set up its first ‘Home Farm’ Colony at Hadleigh. By 1902, there were over five hundred people living on the colony and, shortly after this, it was decided to open a school for the children.

The Salvation Army Colony School used the citadel and library as temporary accommodation. This photograph dates from about 1903, and the headmaster, Major Samuel Collins, may be seen on the far right.

The Colony School also admitted the villagers’ children and, by 1905, it had approximately 100 pupils, of whom about 60% were from the village.

The Colony School closed in 1910, when the new public elementary council school opened in Church Road (now Hadleigh Junior School). Samuel Collins became the headmaster of the new school, a post he was to hold for at least two years.