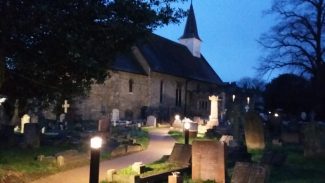 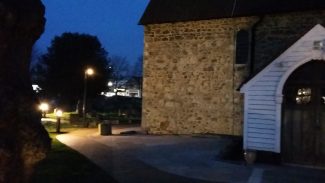 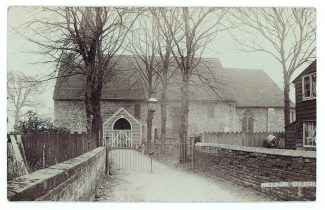 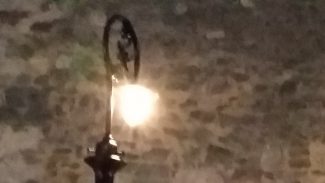 zoom
A close up of the newly lit lamp 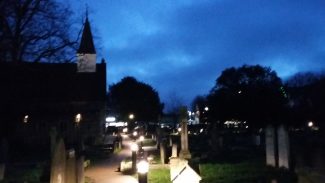 zoom
The lit walk from the new north gateway

The Friends of St James have made the church even more friendly by raising funds for their 2018 Churchyard Project and organising improvements to the churchyard and most of the work is now complete. Once more, Hadleigh residents can find their way to church of a dark evening, following a tradition in place since at least Victorian times.

The electrification of the old lamp by the south driveway has brought it back to life at last after many years since the old gas lamp fell out of use. As it was originally a gas lamp, it may well have been first provided in the 19th century.

The old postcard {from the book, Hadleigh Postcard Memories,  by Bob Nichols} showing the lamp hanging over the south gateway is not dated, but perhaps was a first attempt, after gas lamps were generally replaced by electrical lamps, to tap into the electricity supply from the cottage once standing to the east of the entrance.

The old lamp has been moved to its new position to light the area of newly surfaced and wider pathways leading from the old entrance to the east and from the new north gateway from the London Road. It has been a wonderful gesture to re-use the old ornate lamppost, giving us a look back to how things were in earlier times.

With the high hedges now cut down and all the paths lit by modern lighting, hopefully a shortcut through St James churchyard will  become a regular route for the local community. Don’t forget to show your young relatives the names of the great, good and ordinary old Hadleigh folk on their memorials. By searching this website, you may even be able to tell them the story behind some of those old Hadleigh characters.