You are here: HomenextMain SubjectsnextModern Hadleigh and ThundersleynextArcadian Gardens - A well, a stream, and things that went bump in the night!

Arcadian Gardens - A well, a stream, and things that went bump in the night! 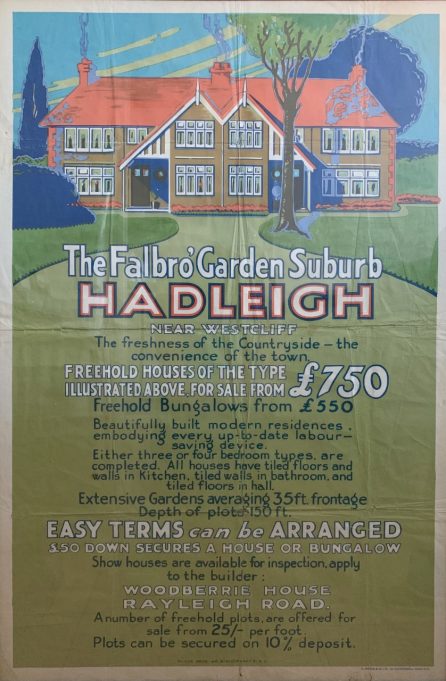 I lived in Arcadian Gardens in the 1960s and early 1970s and I thought it might be interesting to show you an original poster advertising the houses when they were first built. A huge £750 for a house; with bungalows from just £550.
The poster was given to me by Mr Adams who lived a few doors up from us and who worked in the Falkus Bros builders yard that was at the top of the road when we first moved there. This poster has always taken pride of place in every house I have moved to as I have very fond memories of Arcadian.
In 1963, despite our family coming from the West County, when my father was disabled out of the army we were initially sent to a pretty horrible hostel in Westcliffe on Sea. Dad managed to get a job at the Mobil Garage along (I think) the London Road in Hadleigh, and he and mum started looking for houses. They were lucky enough to come across the house at Arcadian, which was owned by two elderly sisters who had lived in the house since it was built in 1924. A couple of kind souls who despite being offered more money for the house by someone else, sold it to us at a lower price because they wanted it to be lived in by a family. So, mum, dad, my older sister and two older brothers and (of course) yours truly moved in.

The house had never been updated and I remember the wonderful mantelpiece and the lead glass cupboards in the dining room. Not so keen on the wall-mounted boiler in the bathroom, or the mangle the sisters kindly left behind for us!
However, it was the garden that was so fascinating. It came complete with an Anderson bomb shelter, a well and, at the bottom of the garden, a very small stream.
Dad filled in the well, yet there was always a slight indentation in the lawn where the earth had settled. One of my brothers used to tell me that if I stood where the well was, the ground would swallow me up and no one would ever find me. I never really got on with my brother! Now, I have to say, it has always intrigued me why there would be a well in a garden of what was a relatively modern house at the time, and so as I was writing this, I did a little bit of research. Voila… in the ordinance survey map of 1867 the well is quite clearly detailed, and I can only assume that it possibly belonged to Common Hall. Even then, it seems quite a way from that particular house, so perhaps many years before there had been another building on the site, perhaps a much older building that needed a well?
Dad also filled in the stream, although both the bottom of our garden and next doors were always very damp. Perhaps the stream had once been underground and had fed the well, but with all the building in the 1920s had reverted to the surface. The other interesting thing about the garden was the narrow lane, lined by trees, also at the bottom. The entrance went from Common Hall Lane right through to the other end of Arcadian. You could walk the entire length at one time, but over the years people slowly incorporated the land into their own gardens. Again, this line can be seen on the Victorian map. This end of the garden always had an eerie feel about it, and I didn’t like to venture there at dusk.

Now, you may wonder why I haven’t detailed what number we actually lived at – well, I wouldn’t want to worry the current owners! The fact of the matter is the whole house felt eerie, not just the end of the garden, and although I loved my childhood living there, there was always a feeling of being watched. My brother’s bedroom that overlooked the garden was the worst. When he moved out to his own flat, I inherited his bedroom and, oh my goodness, it terrified me. I would see orbs coming in the window and the feeling that someone else was in the room with me would be so terrifying, that I would spend most nights under the bed covers. I was very happy when my brother moved back in and I moved back to the box room. My siblings are all much older than me, and it was not until a good 30 years later when I was talking to my sister about it that she admitted that when it had been her room before she married, she used to be so scared in there at night that often she would go into my brothers’ shared room and sleep on their floor. She also admitted that she would never stay in the house on her own. Hmmm, had something happened on the land prior to the houses being built? Had someone fallen down the well? We shall never know.

Of course, living in Arcadian meant I went to the newly built Westwood infants and junior schools and eventually on to The Deanes School, another newly built school. Did you know that in the building of Deanes, over 1000 ancient woodland trees were felled? Progress! How do I know that? My eldest brother worked for the construction company that built the first phase. All three schools were ‘state of the art’ at the time, but all had very modern ideas, so the actual schooling wasn’t brilliant. However, how blessed a childhood surrounded by ancient woodland. I also went to the Sunday School at the Baptist Church at the top of Beresford, as my best friend, Faith, was the daughter of the Baptist Minister, Leslie Jenkins. Her brothers were Brian and Trevor, and her lovely mum had a walking stick and they lived at the Baptist Manse at no. 6 Arcadian Gardens.

Other things I remember were the lovely shops at ‘Vic House Corner’ the fruit and veg shop, the wool shop, the little grocery shop, newsagents, and Allen’s the DIY shop (I went to Westwood infants and junior schools with Kevin Allen the son of the owner).

We moved to Thundersley in about 1973 before coming home to the West Country in 1978 and yet, despite only living there for a relatively short while, both my sister and I constantly talk about Hadleigh, and particularly about Arcadian. We’ve been back to visit friends a few times, but Hadleigh itself is not as it was; even The Crown has gone which is very sad… I had my first cider in that pub!