The Development of Hadleigh Through the Ages 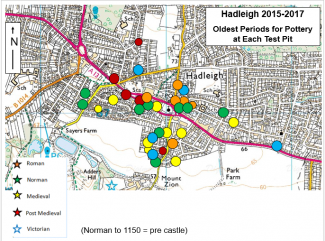 AGES Archaeological & Historical Association (AGES AHA) has coordinated research into Hadleigh’s past involving test pits, mostly in residents’ gardens, dug under the supervision of Access Cambridge Archaeology. The pits were dug by AGES AHA members and a number of local school students, mostly from Southend High School for Boys.

Three years of dating by Paul Blinkhorn of pottery from the pits have shown the development of Hadleigh through time. This can be seen in the map, showing the earliest pottery found at each pit. Although not found in any test pits, it is known that there was an early to middle Pre Roman Iron Age (about 800 to 400BC) settlement to the south west of Hadleigh in the area of the Chapel Lane estate built in 1986.

The test pits have revealed that this was followed by a Roman presence (probably farms) along the High Street, down Castle Lane and up Rectory Road and into Church Road.

No Saxon pottery was found (although local Saxons may have not used pottery), but Norman pottery from before the castle was built (in about 1200AD) was found widespread across the Chapel Lane, High Street, Church Road and Castle Lane areas.

Although the Black Death plague in about 1350AD appears to have knocked back the population (and the amount of pottery found dated to soon after that event), the later medieval occupation appears to have spread mainly around the areas to the south of the town and along Church Road.

From Tudor times, the settlement or farms seem to have spread west along the High Street and towards the cleared wooded areas to the north.

Finally, in Victorian times, the town spread over all the existing areas of housing.

{Ed: previous articles about archaeological research in Hadleigh & Thundersley include the following three, which are clickable links:

AGES AHA at the Hadleigh Crown 2015

Community Dig at 2015 Hadleigh Fair at the Rectory