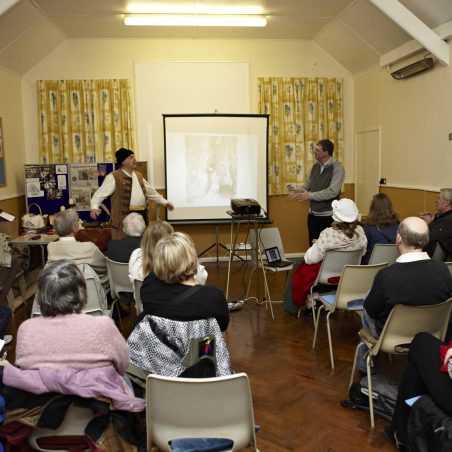 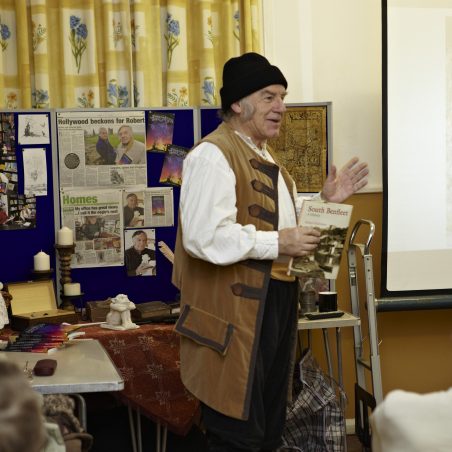 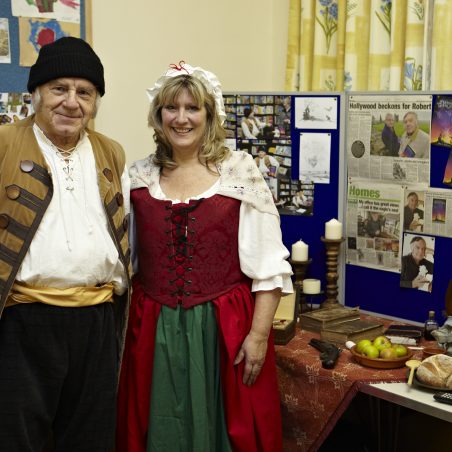 Thanks to Karen Bowman, her enthusiasm, dress sense and exhibits. Here as Aunt Hilda to my Uncle Jonah
Tessa Hallmann 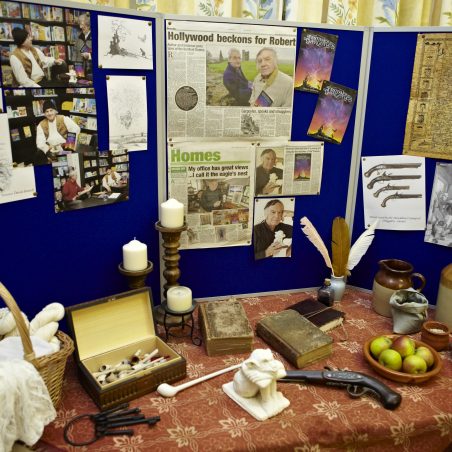 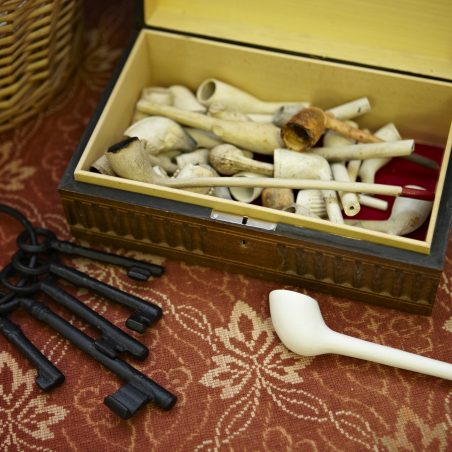 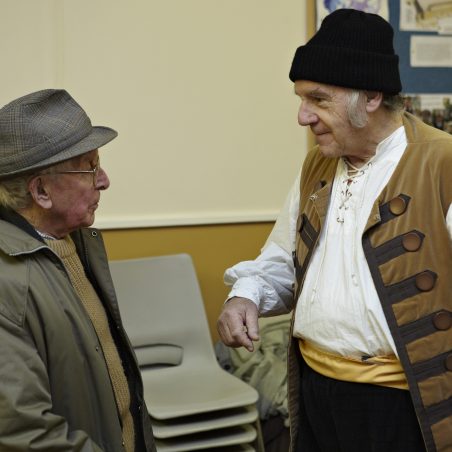 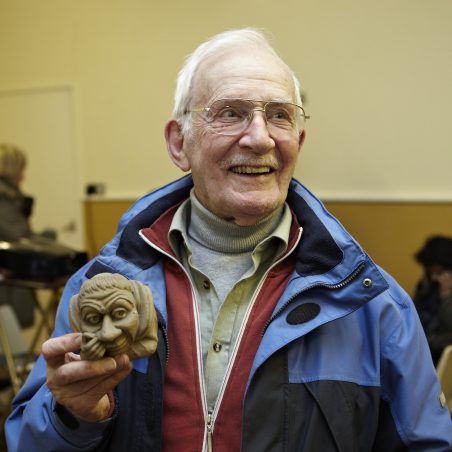 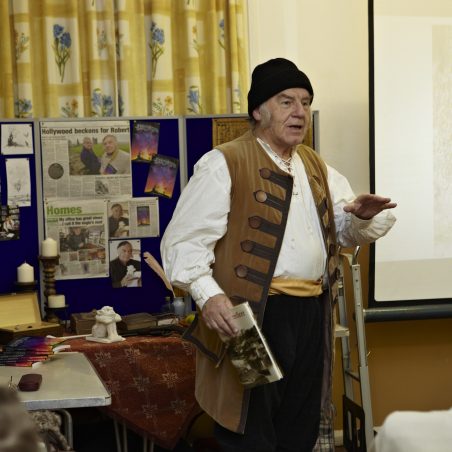 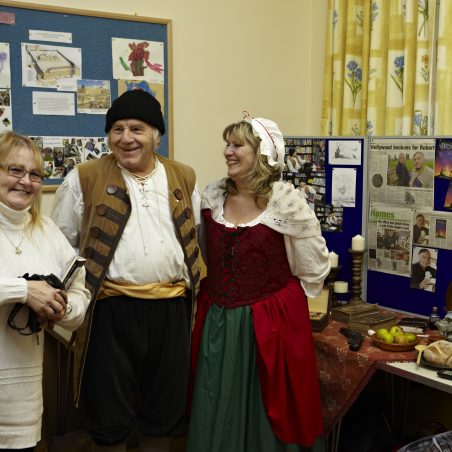 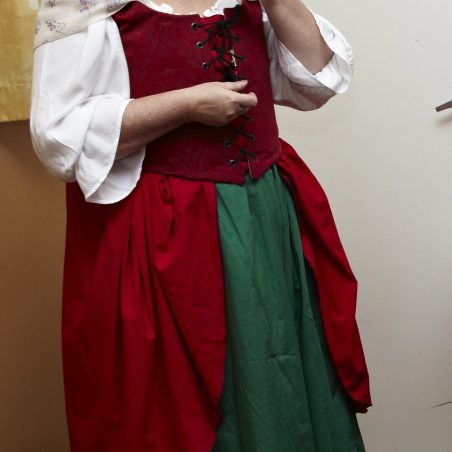 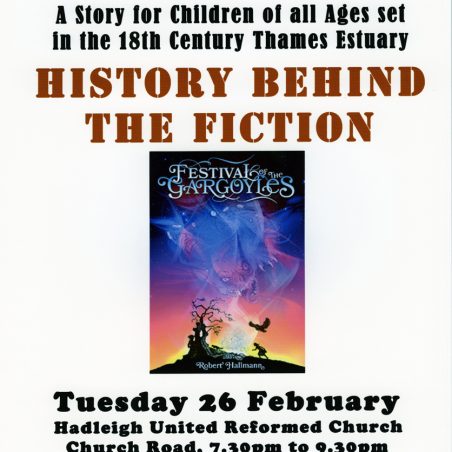 We enjoyed a classic AGES evening 26th February 2013; Terry Barclay announced that Daws Heath will be the subject of a Carenza Lewis / HEFA Cambridge dig project this year; with South Essex school children learning how to perform archaeology to a high standard with complementary effects on their career aspirations.

Then the highlight: a vivid, costumed presentation of facts, images, contemporary items and connections from Robert Hallmann and Karen Bowman in their talk; filling in the background to the new children’s’ fiction book ‘Festival of the Gargoyles’ written by Robert and illustrated by David Hurrell who was also in the audience.

Robert used a digital slide show with scenes of Benfleet, Canvey, Hadleigh and Leigh starting from two centuries ago and delivered with a wealth of supporting research and intelligent gap-filling.

Dating from the time of the Peasants’ Revolt, the building now called the Anchor has all the signs of construction originally as a manor court to ensure administration reached even to Benfleet.

Pictures of Benfleet since those early times showed firstly the Church, the three public houses (Anchor, Crown and Hoy) and a few houses. Focusing our minds a century or more before the timing of the story; Robert set the scene before rail and car, before telephones and television, when there were numerous boats in Benfleet creek, which itself extended round the church under a bridge to behind where the Anchor is now.

Sketches and pictures of the time showed the single road into Benfleet (the High Road), which ended at the water’s edge by the Hoy. The road to Canvey led through the Anchor and up School Lane down to the ford where the bridge is now. Many Thames sailing barges loaded up with hay from Canvey for the vast numbers of horses in London, and the barges returned laden with the plentiful fertiliser that resulted. There were so many elms in the pictures!

By the C18th there was more building and the area – then still owned by the Abbey of Westminster and administered by the Appleton family from Jarvis Hall – showed signs of development. Johann Christian Scheidemantel probably travelled to England in 1737 (with George Frideric Handel) and changed his name to J C Mantel, becoming the famous organist at St Mary’s Church in Benfleet. More details of J C Mantel are available in an article {click here} on the Benfleet Community Archive.

Exhibits from the period were displayed on the table for people to browse at the break; including two original copies of bound volumes of ‘The Lady’ from 1797 and 1799.

Moving away from Benfleet, we saw a superb 1670 sketch of Thundersley Church (St Peter’s) and pictures of children re-enacting 19th century costume and games at Hadleigh Castle.  Considering the local marshes and boats led to views of Leigh’s Cockle boats and misty scenes of marshes which helped imbue the new book with its local atmosphere.

John Constable’s uncle lived at Juniper Cottage in Old Leigh, which makes a lot more sense of Constable being in the area, sketching our most prominent romantic ruin and,  later, painting his famous and evocative view of Hadleigh Castle.   Perhaps an attachment to Leigh encouraged him to ‘relocate’ St Clement’s Church to a notional position where it can be seen in his picture.