You are here: HomenextMain SubjectsnextOrganisationsnextAGES Archaeological & Historical AssociationnextCommunity Dig at 2015 Hadleigh Fair at the Rectory

Community Dig at 2015 Hadleigh Fair at the Rectory 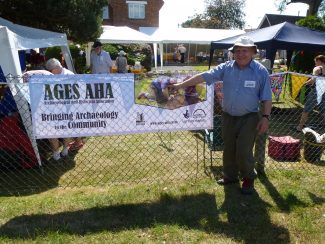 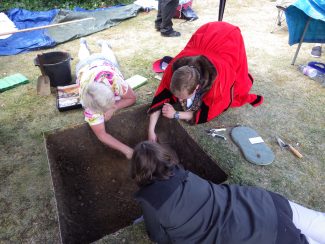 zoom
The Mayor digging at the pit
Terry Barclay 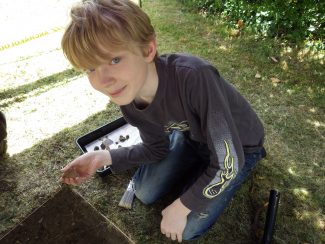 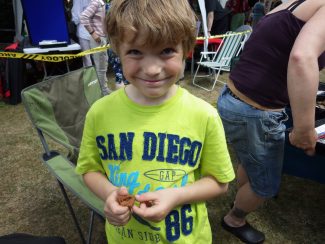 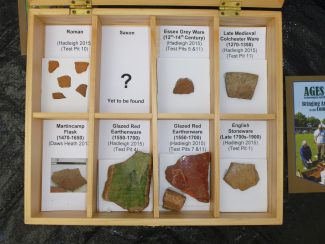 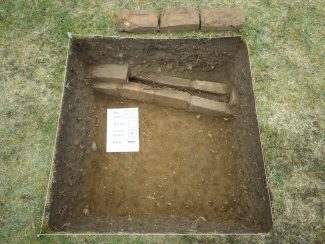 On Saturday, 27th June 2015, AGES Archaeological & Historical Association, thanks to the Heritage Lottery Fund, was able to run what might have been the first ever archaeological “community dig” in Hadleigh.

On a very sunny day, local residents joined in, including both old and young, to trowel in the one square metre pit to uncover pottery and other finds in the front garden of the Rectory. Even Councillor Andrew Sheldon, Castle Point Mayor, dressed in his robes and chain, got involved.

The finds will be all taken to Access Cambridge Archaeology for pottery experts to identify and date all the pieces of pottery, which appeared to be mostly Victorian and perhaps associated with one of the two earlier Victorian rectories which used to stand close by.

Of great interest to the many visitors to the fair was a line of bricks found about 25cm (10 inches) below the lawn. (See photo at bottom of page). It was thought first to be a wall foundation and then later confirmed to be a brick lined drainage channel, presumably a Victorian garden feature probably linking the now disappeared old roadside ditch with water features or natural ponds within the garden.

AGES AHA also hosted an exhibition of the Roman to pre Victorian pottery and other finds from the 11 other test pits dug around Hadleigh in May along with a very popular Mini Dig for younger children.

Photos of the Mini Dig and other AGES AHA events and local history and archaeology can be seen by clicking on the following link at the AGES AHA Facebook page.