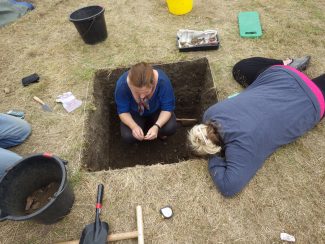 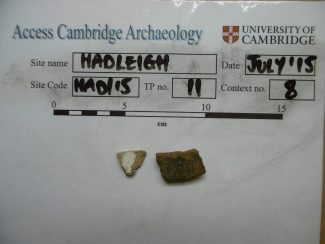 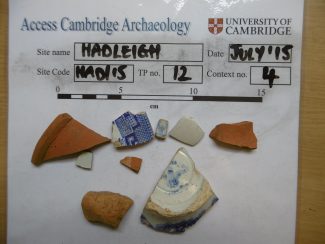 zoom
I piece of Roman Pottery, 1 Tiny Piece of About 1700 Staffordshire Slipware and the rest Victorian
Access Cambridge Archaeology

In May 2015, under the direction of Dr Carenza Lewis for Access Cambridge Archaeology, 11 test pits were dug around Hadleigh seeking information about the development of the medieval village.

AGES AHA dug 2 pits and acted as co-ordinators to find 9 local residents happy to have teams of 4 Southend Schools students digging a hole in their gardens over the 2 days.

In June, AGES AHA invited the community to dig with them in the Rectory garden at the Hadleigh fair.

All the finds were taken back to Cambridge and the pottery dated by Paul Blinkhorn, a medieval pottery specialist.

This revealed a spread of dates from Roman times onwards with the earliest pottery date for the medieval Hadleigh village being AD1000. This could be from the late Saxon period when Hadleigh was first given its name.

Overall, Roman pottery was found in pits in Castle Lane, Rectory Road, Church Road and the High Street indicating an even earlier settlement in Hadleigh than previously thought.

From the time after the castle was built in about 1215, there was evidence of pre 1400 AD medieval pottery from 6 pits centred around Castle Lane and as far afield as St John’s Road near Chapel Lane.

By the time of the Victorians, there was evidence found in every pit as Hadleigh had expanded and the dig overall turned up hundreds of pieces of Victorian pottery over the 15 pits.

Access Cambridge University are due to return on Wednesday May 4th 2016 and pottery and other finds from that day may be viewed in the United Reformed Church hall in Church Road during the following morning.