You are here: HomenextMain SubjectsnextOrganisationsnextAGES Archaeological & Historical AssociationnextMany (used) bottles are not just a load of rubbish

Many (used) bottles are not just a load of rubbish 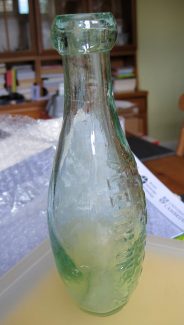 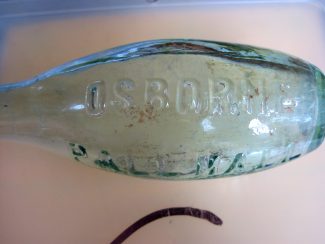 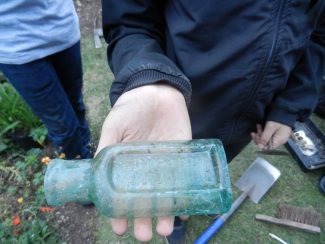 Starting with the assertion that archaeology is mostly based on what people have thrown away, Terry’s talk ranged widely from back-filled fish ponds through individual bottle collections.

One example is that the various stoneware bottles used up to 1910 can be dated for the period of manufacture from their style.

Referenced in the Monmouthshire Merlin, September 1860 {bottles} were those “of Neider Seltzer (sic), known in England as Seltzer Water.” In fact, the place of origin was at a mineral water source in Niederselters, Hesse, Germany.

We learnt about the many local manufacturers such as Cox’s of Southend (deposit of one farthing, with an internal thread for the screw stopper.)

Highlights included;
– Hamilton bottles ( by W.Ingram of Southend) shaped to only permit storage on its side, which helped keep the cork moist and gas tight.

– the Codd-neck bottle, patented in 1872 by Hiram Codd whilst in Camberwell. The neck included a marble which gas pressure pushed against a rubber seal for a tight fit.

– the Ad-le-burg factory in Leigh-on-Sea.

– and a Codd bottle made by W. G. Osborne & Son, Pall Mall, Leigh-on-Sea which was found in Elm Road, Hadleigh.

Further information is available at http://www.whatthevictoriansthrewaway.com

The knowledgable audience of archaeology students and practitioners agreed that Terry had made a good case for considering that “rubbish” really does have a story to tell.