You are here: HomenextMain SubjectsnextOrganisationsnextHadleigh Gardening AssociationnextA funny thing happened to me on the way to...

A funny thing happened to me on the way to...

A talk at Hadleigh Gardening Association on 15th August 2019 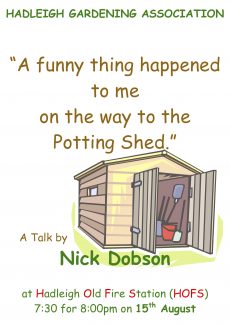 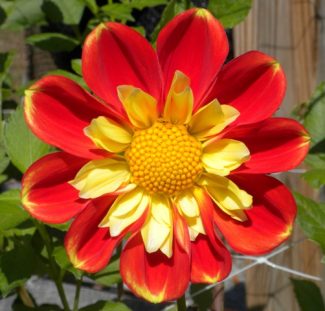 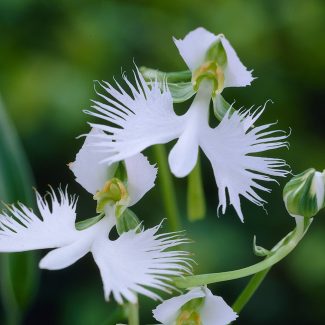 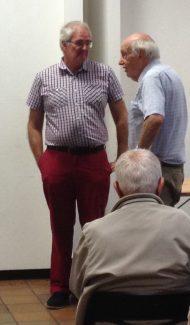 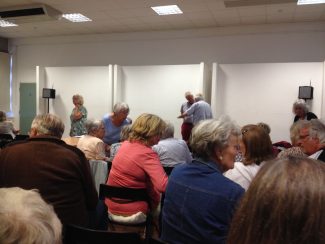 Nick Dobson delivered an illustrated talk entitled ‘A Funny Thing Happened To Me On The Way To The Potting Shed’ to an enthusiastic audience at Hadleigh Gardening Association (HGA) on the evening of Thursday 15th August 2019.

The talk – one of more than 70 in Nick’s repertoire – was held in the Appliance Bay at Hadleigh Old Fire Station (HOFS). The room was packed to hear how Nick had been inspired by listening to Percy Thrower, had then become National Fuchsia champion and developed a wide range of references for his talk, leavened with humour in the garden.

As Cicero said;   “If you have a garden and a library, you have everything you need” and Nick sprinkled a wide variety of tips derived from both his garden and his library; including:

There were numerous, brilliant pictures to accompany the talk;  e.g.
Keukenhof at Tuliptime with reflections on an early investment bubble.


Then the  colourful Dahlia  collarettes;   and from the sublime egret orchid
Pecteilis radiata:  (syn. Habenaria radiata) to the rather earthier subject of humorous privet topiary.

The visually humorous  was balanced – fully in the spirit of the evening’s theme – by several suitably groan-inducing puns.

The tea break was followed by a Q&A session, including how to start dahlias early to enable propagation and give them such a good start that slug damage is minimised.

We can look forward to another of Nick’s talks at the HGA in Spring 2020.