The Fair is to be held on Saturday June 23rd, 2pm to 5pm at Hadleigh Old Fire Station (HOFS) and is organised by the Hadleigh & Thundersley Community Archive.

There will be displays about Hadleigh’s past, experts to talk to and costumed characters to meet (including Cunning Murrell). Essex County Council’s Legacy Team will be there too, to talk about plans for improving Hadleigh Country Park.
To tie in with the Olympics, there will be a gala Teddy Bear Parachuting Event from the top of the Firemen’s Training Tower and children (young and old) are invited to compete by making a parachute for a favourite toy bear. 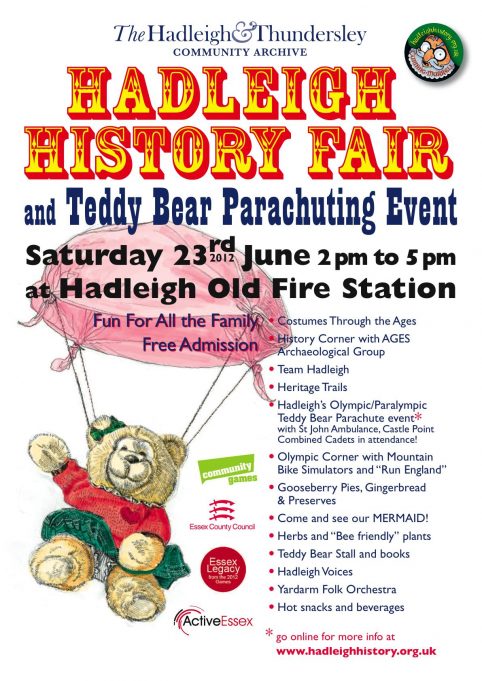 Marilyn, the Fayre Bear of Hadleigh by DH

The annual fair was quite famous. Midsummer’s Day was a Quarter Day, one of the four days on which, since the Middle Ages, contracts for farm workers and servants were renewed, rents were due and leases were assigned. Hadleigh was an agricultural district – 90% of the people worked on the land – and substantial business was carried out during the annual fair. Midsummer’s Day was a time for letting one’s hair down a bit too, and having some fun.  Peep Shows would come to town, advertising curiosities such as Human Skeletons, Two-headed Sheep, Bearded Ladies or Mermaids.

Gooseberries were in season, so Gooseberry Pies were always on the bill of fare.  Gooseberry Pies and Gingerbread will be on the menu again at Hadleigh History Fair and there will be a mermaid too (of sorts)!

Here are instructions for parachute making, no liability accepted for loss, damage or missing bears. 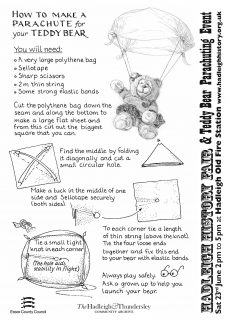 The Bear Necessities of Parachutes by DH