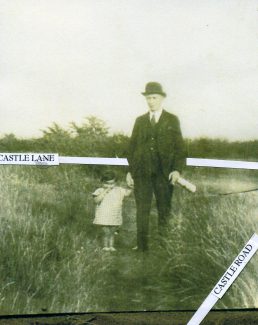 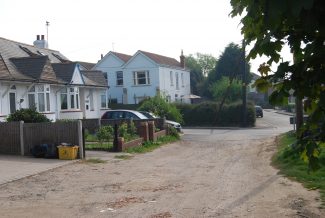 The attached photo was taken in the late 1920s of my father and sister Erica. It is at the North East corner of Castle Lane and Castle Road West, looking across from Dorlie {No. 72.} Note the lack of houses in the Lane.

In the 1930s, Mr. Mason a local builder bought the land and built the bungalows that now stand there. Mr Mason lived at the south corner of Beech Road and Castle Lane with his family. The family included:
– a son who ran an engineering workshop in the garage at the end of the garden,
– Cissy, the elder daughter, who married Cyril Wiggins a builder of Thundersley,
– Ruby who married Mr. Latchford who ran a greengrocers shop in Thundersley and
– Joy.

A few years ago I met Joy at a choir concert in Hadleigh; we arranged to meet up and have a chat about Hadleigh but, sorry to say, Joy was taken ill and died soon after.