Death of a Chorister 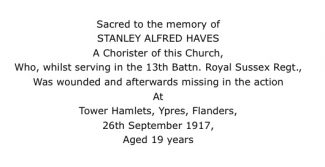 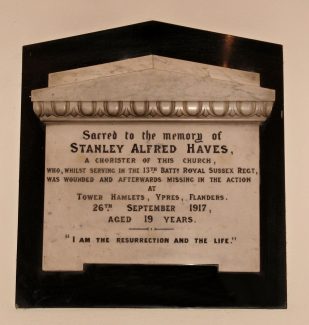 We have read about it and seen it in pictures, but the horror and sacrifice of Passchendaele in WWI was recently brought back to us on researching a simple plaque we find in Hadleigh’s church of St James-the-Less.

A lengthy communiqué from British General Headquarters contains the lines: ‘On our right English county troops reached the line of their final objectives after sharp fighting in the woods north of the Ypres-Comines Canal and in the neighbourhood of Tower Hamlets (a heavily fortified enemy position near Gheluvelt).’

The obituary from the Southend Standard and Jeff Jarvis’ Southend and District Roll of Honour starkly explains:

Private Haves was the son of Mr Alfred H Haves of ‘Hawthorne’, Sandleigh Road, Southend on Sea and was born at West Ham. He enlisted at East Ham in February 1917, and was killed in action on 26th September following. Reported missing, the British Red Cross were finally able to confirm that on the morning of 26th September 1917 during an attack at Tower Hamlets near Passchendaele, (the German lines being three quarters of a mile away). Haves was knocked over as his regiment ‘went over the top’. He tried to get up but could not do so. His regiment reached their objective and held it.’

On that day Tower Hamlets fell to British troops.

Another newspaper reported: ‘Stanley Arthur Haves was killed on 26 September, 1917 which was during the Battle of Polygon Wood – 26 September to 3 October, which was part of the Third Battle of Ypres (31 July 1917 – 10 November 1917). Tower Hamlets Spur was east of Ypres, Belgium.’

The Third Battle of Ypres was one of the major battles of World War I. When the 19-year-old Private Haves from Leigh-on-Sea went ‘over the top’ on what once had been marshland and had been turned into ‘an impassable terrain of deep mud…’, he was one of many who lost their lives that day.

Thanks to Val Jackson, Karen Bowman and Nick Turner for their help.