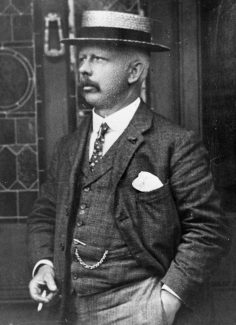 A familiar and important figure in the parish life of Hadleigh for many years and a gentleman to whom the village residents have, on at least two occasions publicly testified their appreciation of his countless services to them, Mr Alfred Hawks, a former Headmaster of Hadleigh Church School, was buried in his native village of Snodland, Kent, on  Saturday.  He died on the previous Tuesday, the day following his 90th  birthday, at Snodland.  Mr Hawks first became associated with Hadleigh in May, 1875, when he  took over the headmastership of the Church School.  Attendance at the  school then averaged only 68 (incidentally, that was considered a good  figure), and deceased quickly became associated with public work in the  village.  He became a member of the local Parish Council, then its  Chairman, and he held this last position for a number of years.  For a  period, he was a member of the Rochford Rural Council and the Rochford  Board of Guardians.

It might be said that the social life of Hadleigh revolved round Mr. Hawks during his stay in the village. He organized, year after year,  glee parties, garden parties and innumerable other parish socials and  activities.  His services to the church were practically unlimited.  Not only did he fill the position of Rector’s Warden efficiently for a  considerable number of years, but he regularly read the lessons in  church and would often play the organ. At the celebration of his  golden wedding on August 12th, 1925, many good wishes and gifts were  received by him, and, on his retirement in 1918, a meeting was held and  presentations were made to him.  The Conservative cause also received the active support of Mr. Hawks, who was Chairman of the local association for some time.  Moreover, he  was a Freemason of long standing, being a member of Trinity Lodge,  Rayleigh.  He was Worshipful Master of that Lodge in 1908, and in 1930  he was appointed Past Provincial Assistant Grand Pursuivant in the  Essex Provincial Grand Lodge.  After his retirement, Mr. Hawks took up residence at Holbro House,  Chapel Lane, Hadleigh, and in 1940, he removed to Snodland.  He is survived by a widow, three sons and five daughters.  Mr. H. R. Tutt, J.P., of Hadleigh, writes:  Mr. Alfred Hawks, who was for so long engaged in the public life at Hadleigh, passed peacefully  away on December 14th, the day following his ninetieth birthday.  Mr.  Hawks came as headmaster to Hadleigh Church of England School at the  age of 21 on leaving college, and was in charge of that School until  his retirement just after the last war ended, but he continued to live  at Hadleigh and to take an active interest in local work up to 1940,  when he removed to Snodland, Kent. Every old inhabitant of Hadleigh  and district was known to him and he to them.  He was a keen church  worker and for 40 years was organist at the Parish Church where he read  the lessons to the time he left the district.  He was, for a very long time, People’s Warden, and in his later years, Rector’s Warden, at the  church.  He took an active interest in parish affairs, and was a Chairman of the  Parish Council.

After his retirement, he represented the district on  the Rochford Rural District Council and was a member of the old Board  of Guardians.  He was too, keenly interested in politics, being an able  Chairman at local meetings of the Conservative Party, where he  displayed fluency of speech with a fund of good stories to enliven his  discourse.  He was a member of Trinity Lodge 1734 and was W.M. in 1904, and he was  Past and Provincial Grand P.  His interest in affairs never ceased and, up to a few days before his  death, he read the lessons every Sunday in the church he attended in  Kent.  Mr. Hawks used to relate that, in his early days at Hadleigh, a visit  to Southend was a long country walk to within a very short distance of  Victoria Circus.  At the funeral on Saturday, the Vicar of Snodland conducting the  service, paid a striking tribute to the life and influence of the  deceased.  Interment was in the churchyard, and the family mourners  were: Messrs.G.,F., and L. Hawks (sons); Mrs. Thorneycroft, Mrs. Heathcote, Mr. and Mrs. Diggins, Mrs. Vincent, Mr. and Mrs. Mackney  (sons-in-law and daughters) and a niece.