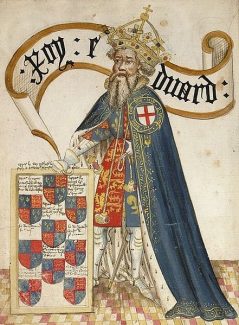 Edward III (reigned 1327~1377) was the first king to see the strategic importance of Hadleigh Castle, which had been built in the early 13th century.  It was ideally situated as a base for defending the Thames estuary against French raids during the Hundred Years War. Edward’s claim to the French throne had led to war with France. The need for a more systematic defence of the Thames estuary led the king to refurbish and extend Hadleigh Castle in 1360. The castle had been neglected during the years when the country had been safe from the French. It would probably have been allowed to fall into complete ruin but for this second threat to England’s security.

Edward III spent large sums of money on a new gateway and high tower, lodging chambers and a chapel. The east front was transformed with the addition of two impressive towers. These towers were circular outside but six-sided inside with walls nine feet thick at the base. Both towers were three storeys high and the upper storeys were reached by newel staircases built into the thick walls. The splayed loopholes still remain, from which archers could be posted for defence. The King’s Chamber, built against the south curtain wall, contained various apartments including a large hall with a solar (withdrawing room) on its southern end. The hall had a high-pitched roof, either tiled, thatched or covered with lead. ‘Plastre Parys’ from London and glass from Rayleigh was used in the King’s Chamber.

The structure was built of Kentish ragstone, cemented with a mortar made with lime, sand and ground seashells which was quick-setting and hard. The parts of the castle which can be seen today are the remains of this rebuilding.

Hadleigh became a favourite retreat for the ageing king. There are excavated foundations of the most important part of the castle – the great hall. It had a serving room at the end and beyond it a private withdrawing room, or solar.

[In 2018, students from SEEVIC created videos to show what the castle may have looked like after Edward’s rebuilding. Two links to excellent examples of the videos are provided above.]