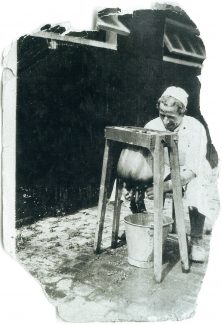 Long before Morrisons there was the Salvation Army to take over and ‘improve’ Hadleigh, except that the Army’s objectives were not guided by profit margins, but by the noble doctrine of helping fellow man. General Booth, the leader of that campaigning ‘Army’ had identified honest toil as the antidote to ruined health and wasted lives. He would take the down-and-outs and rough-sleepers of London and set them to work on their self-confidence and give them skills that would serve not only the men themselves, but also the wider Commonwealth:

This is a report taken from Essex Newsman of Saturday, 11 April 1891:

The home colony in the Rochford hundred.

It may now be taken for granted that the site for the “home colony” of General Booth’s “Darkest England” scheme will be at Hadleigh, about four miles from Southend. It is proposed to acquire 1,000 acres of land, and up to the present five different properties, mostly in Hadleigh parish, have been purchased; two through Messrs. Baker & Sons, the London land agents and auctioneers, and three through Mr. T. W. Offin, jun., of Rochford;  making altogether about 650 acres. The ruins of Hadleigh Castle are included in the purchase, and some uneasiness had been felt in the neighbourhood from the idea that General Booth would have them pulled down. Mr. Offin, however, pointed out to the “Army” authorities that this would cause a great deal of local dissatisfaction, inasmuch as the Castle has been a great attraction, especially for excursionists to Southend, and its destruction would particularly affect the proprietors and drivers of vehicles at that place. He also pointed out that if the ruins were pulled down the value of the property would be affected if they should wish at any time to dispose of it. These arguments seem to have been availing, and it is now proposed that the ruins shall be inclosed, and a small charge made for admission.

The carrying out of this scheme will be of great benefit to the surrounding neighbourhood, as there is no doubt that in course of time a considerable town will grow up at Hadleigh. It is proposed to send about 500 people to Hadleigh as soon as sleeping accommodation can be provided for them. The centre of the settlement will be at Hadleigh and Castle Farms, and when the first 1,000 acres is in thorough working order General Booth proposes to add another 1,000 acres to the colony. The first thing to be done will be to get it in order for the reception of settlers, and it is anticipated that this will cost between £10,000 and £15,000. As soon as the colony is fairly on its feet the settlers will be wholly responsible for its working. Before deciding on the purchase of this land the opinion of those experienced in the various branches of work to be undertaken was obtained, and the services of Mr. Harold E. Moore(?), consulting land agent, were retained. Under the instructions of General Booth, Mr. Moore visited various labour colonies in Holland and Germany during Easter week. The farms at Hadleigh have been selected in consequence of their adaptability for producing the dairy and other produce required for consumption, both on the settlement and in the various organisations carried on by the Army, while they are very accessible by rail and water, are very healthy for residence, and the land is capable of much improvement by spade culture. The Army will probably be in possession of the farms early in May.

Research thanks to Karen Bowman