You are here: HomenextMain SubjectsnextPeoplenextGrowing up in Hadleigh in 1920s and 1930s 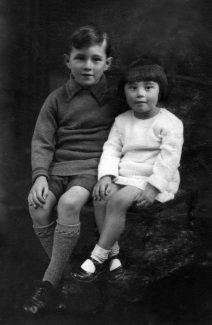 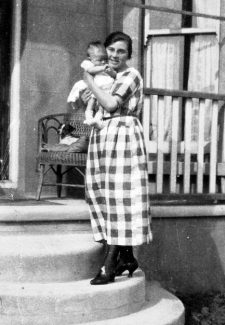 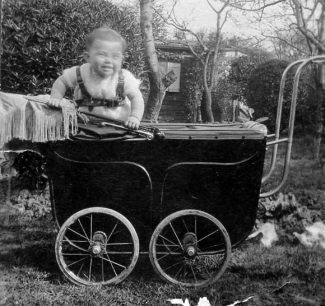 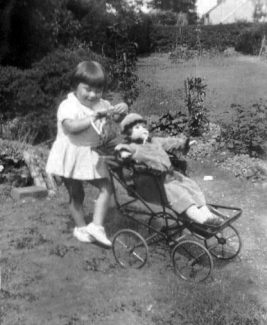 zoom
Erica with one of her dolls
Ian Hawks 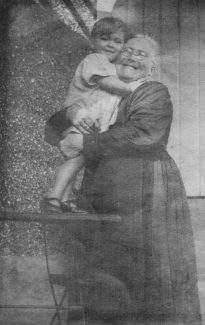 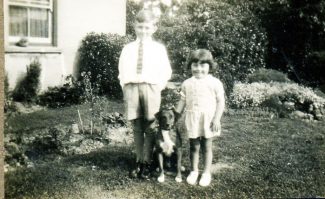 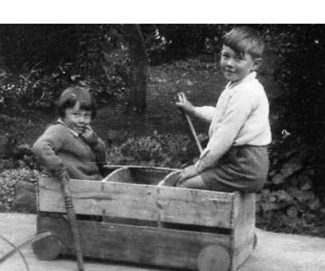 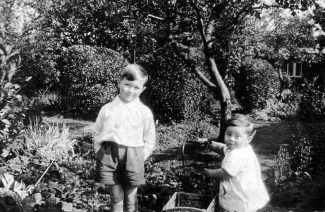 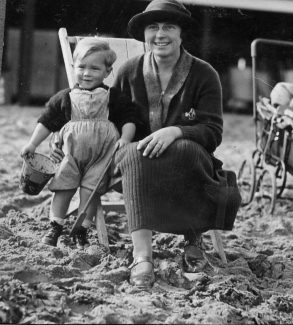 zoom
Ian and Mother, a day out at Leigh beach
Ian Hawks 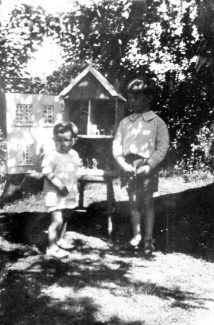 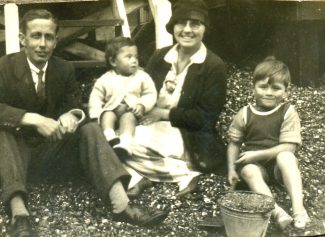 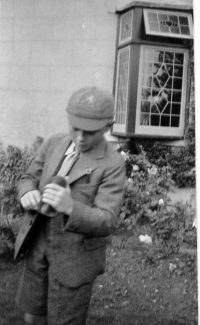 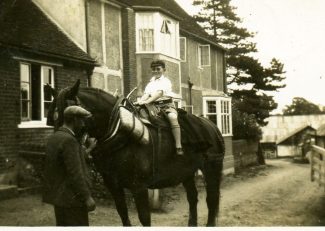 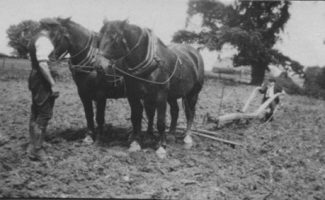 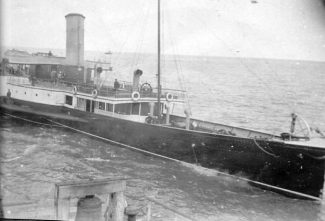 zoom
Off to Margate for holiday
Ian Hawks 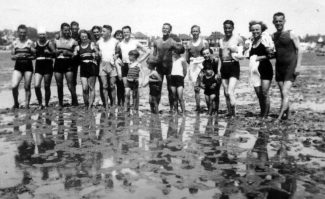 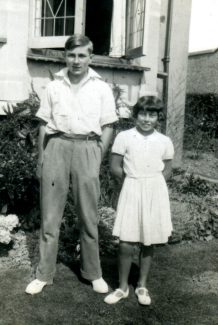 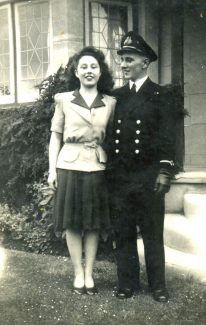 zoom
Ian and Erica. January 1939 off to sea: end of childhood
Ian Hawks

A short history of our childhood from 1920s to the 1940s living at Dorlie No.72 Castle Road West.

Our parents were married at Hadleigh Congregational Church, December 1921 and moved into Dorlie, which was a wedding present from Mother’s father, the Revenant Bull. I was born 1923 and Erica 1927.
Dorlie was to be our home until we married and went our separate ways, Erica to Benfleet and later Canvey and myself to Thundersley.
Father was very laid back and I don’t think anything worried him, Mother on the other hand being a minister’s daughter [Rev. Bull] had very strict values which she passed on to us and which we appreciated her for in later years.

It would not be accepted these days but Mother had a small handled cane above the kitchen range, called Tickle Toby; it was not used much, only to tickle the back of our legs if we misbehaved.
In the early days Dorlie had no main services, lighting was from oil lamps, heating from oil stoves and open fires, cooking on a large coal burning range and water pumped from a well and, yes, an outside toilet.

It was later that all services reached Castle Road West, then we had the luxury of a bathroom complete with a gas copper geyser, which had to be lit every time a bath was required. I can remember kneeling in front of an open fire to dry our hair.
Before school age we both went to the Congregational Church Sunday school.  Our first school was Holmwood, a small school in Arcadian Gardens run by Miss Howship. Erica’s school friend from early days was Pearl Horder who I married in 1948.

In the 1920s and 1930s, Hadleigh was still a small village community. The main shops in the High Street were Schofield & Martins grocers, Smith the butchers, Lawrence’s the sweet and card shop, and in London Road the Co-op grocers, Margerison’s the chemist, Keddie’s the drapers and Emery’s the gent’s barber [which is still in business] to name but a few. Margerison’s used to develop and print our black and white photos taken with a Kodak box camera, which is still with me.

There were two shops in Castle Lane; Fern’s at the east of the junction with Elm Road and Hylton’s at the north east corner of Castle Road and Castle Lane.    Both sold sweets, soft drinks and a minimum amount of tinned and packaged groceries. During the summer Mr Hylton made his own ice cream and sold it from a stall outside to the passing visitors to Hadleigh Castle, his wife had a teashop attached to the main shop.

We had great Christmas’s with our parents and Grand Parents. Christmas Eve would be spent around the log fire in a brick fireplace, roasting chestnuts in the grate.
In the corner would be a large tree suitably decorated including wax candles, which would be lit, [no health and safety in those days]. Just before going to bed we would place an empty pillowcase at the end of our beds with a tangerine and a walnut in them for Father Christmas, hoping he would fill our pillow cases with presents, which he did.

An annual treat was to visit the Fair and Circus, this was set up on the field which is now Morrison’s car park. Although it is now frowned upon, it was a great thrill to see the wild animals, lions, tigers and elephants also the very noisy performing sea lions. The elephants were walked around Hadleigh every morning for exercise and as an advert for the circus.

The manager of the newly opened Kingsway Cinema was a friend of my Father and one day he invited him and myself to have a look around the new cinema, showing us the projection room, the air conditioning unit and the Compton Organ; introducing us to Peggy Webber the organist. I was offered a free pass to the cinema any time I wished which I made great use of.

In those carefree days, children were able to play outside without any worry and supervision. We used to wander over Hadleigh Castle and surrounding hills on our own enjoying the wild life, seeing the various birds and enjoyed watching the wild rabbits on the hill, which is now the Mountain Bike Track.

We were also allowed to wander around the Salvation Army farms and Brickworks at the bottom of Chapel Lane, where our paternal grand parents lived {see Alfred Hawks, schoolmaster}.
Another joy was to watch the shire horses drinking out of the horse pond west of the S.A. Citadel, which is now the site of a small public garden.

During any snow we would toboggan down the west slope of the Castle and – if it was thick enough – skate on the pond to the west of the railway bridge.
I was very apt in making go-carts using old Silver Cross pram wheels purchased from Reynolds junkyard on the west corner of Homestead Road and the High Street for a few pence. We had great fun riding them down Castle Lane to the Salvation Army Farm entrance, watching out for the very occasional car or horse and cart.

One of our cousins was a dance teacher and held tap dancing lessons in the Estuary Club of Leigh; both Erica and I attended the classes, Erica became very good at it but I am afraid I was not so good and lost interest.

I remember once having a week’s holiday at Clifftonville travelling via Southend Pier on the paddle steamer Golden Eagle to Margate. Most of our holidays were spent either on a friend’s farm at Wicken Bonhunt, Essex or at Father’s sisters farm near Sevenoaks.
We loved the country life and enjoyed harvest time, leading the shire horses with loaded hay cart down to the haystacks and, as the last of the wheat was cut, chasing the rabbits towards the guns; we lived on rabbit stew for weeks.

Another treat was to catch the bus outside Hadleigh Church to Leigh Church, then by tram to Woodfield Road, then a walk down to Chalkwell Beach via the footbridge by the station.
The day would be spent with friends at one of the corporation beach tents that would be hired for the day. It was great fun walking out to the Ray if the tide was out, covering ourselves with mud before a swim and clean up.