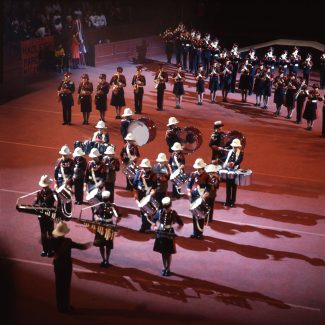 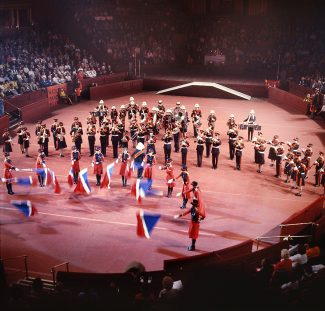 My  name is Peter Lovelock and I was a playing and marching officer in this great organisation for many a happy year.

When I first came to hear about the band and majorettes in 1972, I was principal cornet in Colchester Silver Band.   As I was in the process of transferring to Southend in the GPO telephone engineers, I decided to join the band as a playing officer and was amazed at the enthusiasm of the youngsters.

It was on joining that I met Jean who was head Majorette Officer and who eventually became my wife, indeed we had to plan our wedding date around the band arrangements.  There followed many happy and busy years with brilliant engagements such as the Royal Albert Hall, the Lord Mayor’s Show and carnivals both here and across the Channel; like the time we played at Chateau Thierry in the Somme area for the Bloem Fontein Festival.  There, all the bands were required to play at the War Memorial in turn and we, resplendent in our Royal Marine’s look-alike uniforms marched up to the Memorial, playing the march “Soldiers of the Queen” and at the Memorial played “Evening Hymn” and “Last Post”.  Many a handkerchief was used by the elderly to wipe away a tear, it was quite a memorable atmosphere and it could be said that we were Ambassadors for our country.

Another occasion was when we spent a week at Shorncliff Barracks, Dover, to play in the military tattoo alongside the bands of the Royal Scots, the Devon and Dorsets and the Ghurkas.  Many of their members spent their spare time teaching our lads during our practising sessions and indeed the Royal Scots band actually adopted us and gave a free concert at the Cliffs Theatre in aid of new uniforms for us.

One other engagement I should mention was when we were invited to play carols to her Majesty the Queen at Buckingham Palace, where we played alongside Chalk Farm Salvation Army Band – with me standing behind Cliff Richards ( I hope I didn’t give him an earache!)  After this we proudly marched back down the Mall, playing our arrangement of “Star Wars” written by Nick Cottage.  We must have made quite a spectacle, together with the two majorette troupes.

It was some time after that, we changed uniforms to that of American college style and entered American marching style competitions under the new name of Hadleigh Marching Militaire together with a group of girls forming a Colour Guard squad.

I would like to say many thanks to the friends we made during those days with a special mention to George Downing (Property Master) and his wife Lillian, also to John Wilson, the Director of Music.