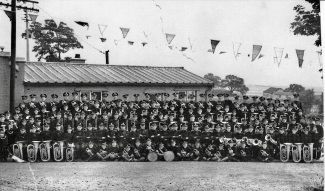 zoom
A typical Band Camp photo, this one in 1955. Around 100 delegates gathered, plus their tutors.
Graham Cook collection 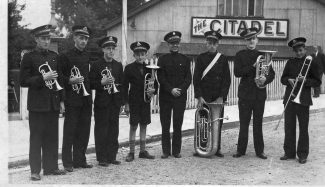 zoom
A small group of delegates outside the Colony Citadel.
Graham Cook collection 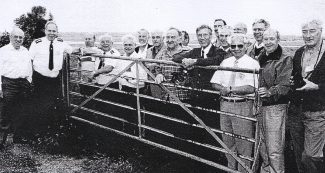 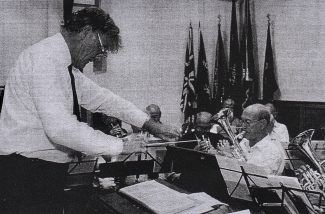 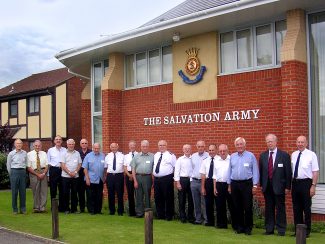 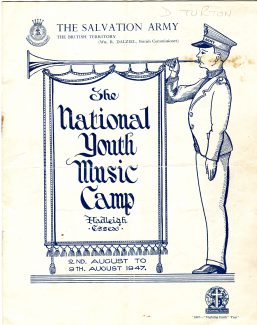 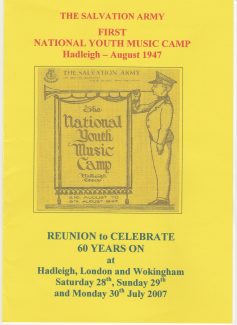 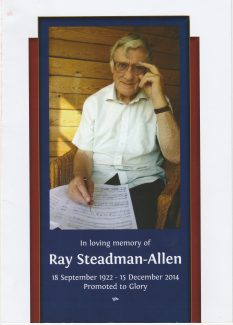 Recently an original programme came to the attention of the archive group for the above event, copies we have seen already, but this one had many signatures, collected by one of the delegates. The roll call of staff and tutors reads like a Who’s Who of well-known Salvation Army names. This prompted this article that hopefully will be of interest. (ED)

The first British Music Camp took place between 2-9th August 1947 at the Hadleigh Farm Colony. The military had occupied the Colony during WW2 but when the war ended in 1945, the Ministry of Works put pressure on the Colony management to re-open the brickworks to help with post war reconstruction. However, the effects of the war and military presence meant the recreation room and number one dormitory had to be pulled down because of poor condition. The maintenance of the Colony’s buildings was a constant headache but in 1946 brick making did recommence for a while, but the machinery was clearly obsolete.

How could these premises be used?  Well, the idea of a music camp in post-war Britain was born in the fertile mind of Commissioner Edgar Grinstead but after a new appointment, the job of bringing this idea to life was given to the new leader of the British Territory, Commissioner Kaare Westergaard, who was the Camp Director. There have been Salvation Army music camps in the USA for some years, the most famous being at Star Lake and there was keen interest from overseas in this new British endeavour. Richard E. Holtz, Territorial Music Director in New York wrote; ‘We wish you the best for the first British Music Camp. It should be an outstanding feature in such a famous brass band country’.

It was a bit like an invasion, about a hundred keen musicians with mixed abilities started to arrive at the Farm Colony gates. They arrived singly and in small groups from all over the country, carrying their baggage and instruments. I think this was about the maximum that the team could handle, all boisterous, irrepressible and tireless youngsters.

They were soon put into groups according to abilities and received lessons in theory of music, sectional practices and full practices.  There was instruction in tone production and care of brass instruments. It was a full day`s curriculum starting at 7am with a ‘Reveille’ and ‘Duties’, ending at 10.30pm, ‘Lights Out and ‘Quiet’. There were of course times for relaxing with games and activities such as various sports, swimming and treasure hunt. The surroundings at Hadleigh were ideal for a summer holiday and the young students hopefully would return to their homes physically fit and enriched in their spiritual and musical knowledge.

Band Camps were to continue at Hadleigh for the next eight years with the exception of 1948 when the camp moved to RAF Kenley in Surrey. Today the Salvation Army still runs ‘Music Schools’ each year (not band camps) which are referred to as the TERRITORIAL MUSIC SCHOOL (TMS). Those early days at Hadleigh began a tradition that has continued to the present day.

There was a remarkable turn out for the camp’s 50th celebrations, with more than 50 of the original 97 delegates celebrating in grand style.  Some had travelled as far as Vancouver, Canada and Pasadena, USA.

All day at Hadleigh was spent renewing acquaintances and friendships and then embarking on a series of rehearsals, under the baton of Ray Steadman-Allen. He was the only living member of the original team of leaders from 1947; sadly he passed away in 2014 (age 92). He wrote a March for the band to play in 1947 ‘Hadleigh Camp’ and wrote another March ‘Hadleigh Reunion’ for this anniversary.

Well, they met up again, those who were able to come and gathered for one final reunion in 2007, well maybe the last, who knows?

Signatures obtained on the programme: