Island in the stream

Notes on a potential right of way 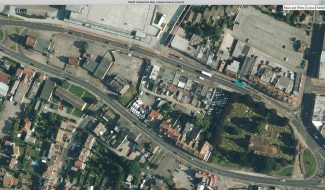 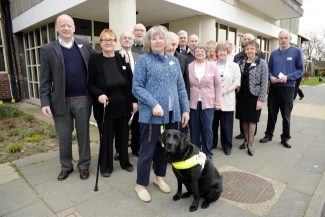 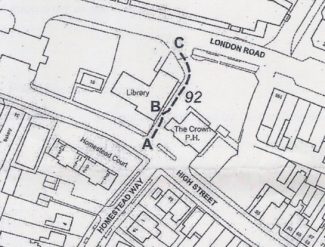 The Prologue
An access point and path between the Library and the Crown Public House had been used for many decades by Hadleigh residents to cross the road “island” between the A13 High Street and A13 Kingsway or London Road.  In 2013,  Essex County Council agreed that there was a path and made an order to show it on the Definitive Plan for the area.    Here is an extract of the map facility on Essex Highways (click to view source here.)

The road traffic streams both towards and away from London had increased significantly over the past decade;  “blue-light” vehicles can take several minutes of loud siren activity to clear a path for themselves, whether upstream or downstream. The controlled crossings on either side of the island near the Crown Pub are in very frequent use.

The Hearing
The Inquiry opened 18th March 2014 to hear evidence as to whether the 25th March 2013 Order FPS / Z1585 / 7 / 76 proposing to modify the Definitive Map and Statement should be confirmed.   On Page 4 of the Inspector’s Order Decision, downloadable at the end of this article; the notes include this point:

“The Chief Executive of the Borough Council reported to the Highways Committee in March 1994 “…..…the traditionally used pedestrian way from the High Street to the London Road …….it had been utilised for many years….   it was possible that the Council would be able to provide sufficient evidence to establish that a right of way existed.”

The detail of the five main issues tested in the hearing are at the end of this article.   Order Decision Page 10 is attached, with the relevant part of the  island map included in the decision downloadable.

The Decision
The Planning Inspectorate’s cover letter {reference FPS / Z1585 / 7 / 76}  was dated 16th April 2014 following the inquiry on Wednesday 19th March 2014. and enclosed the Order Decision by Peter Gillman BA.  The decision reached after the March 2014 Inquiry was in favour of Castle Point and against the 2013 Order.

23rd April 2014;   Essex County Council wrote to the witnesses who had attended the Public Inquiry regarding Footpath 92;   “Further to the Public Inquiry held last month, unfortunately the Inspector has decided that the Order should not be confirmed.”    This marked the end of a process required by the Wildlife and Countryside Act 1981, section 53.  The materials from the Planning Inspectorate show the decision is final unless successfully challenged in the High Court.

Commentary
Though the access beside The Crown pub was traditionally used without a set single route marked out,  the map shows it had been the best way to walk across the island, effectively connecting two controlled crossings when not blocked.

By 2013, however,  the Council preferred an opposite opinion; possibly to facilitate the long mooted potential regeneration project  without an inconvenient right of way across the site.

The five main issues tested in the hearing were as follows:

=======
Note from September 2017.   The Crown Inn site remains completely if “temporarily” walled to a height of 8 feet by wooden panels. These secure the site of the now derelict Crown Pub and also prevent access to the direct route between the controlled crossing on the High Street near the library and the equivalent controlled crossing opposite Morrisons  on the Kingsway / London Road.  of sometimes fast-moving  traffic on a key trunk road.
Pedestrians now use the same controlled crossings by using the side access between the Library and HOFS, a less direct route than before, which requires them to cross the Library Car Park.