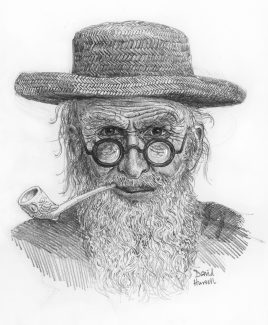 James Murrell was a ‘cunning man’ who, during the 19th century, was widely sought after for his magical powers.  Murrell was famed for his healing powers, herbal remedies, divining lost objects, astrology and clairvoyance, and casting and breaking spells.  It is difficult to distinguish between fact, fiction and myth, as much of what was known of his knowledge, skills and abilities was passed down verbally as stories, and later turned into legend.

The historical facts about James Murrell are recorded in parish registers, death certificates and census returns. James Murrell, the eldest child of Edward and Hannah Murrell, was born at Rochford  in about 1781,  and baptised on 9th October 1785 in St Mary the Virgin church at Hawkwell. It is probable that James Murrell married Elizabeth Frances Button on 12th August 1812 in St Olave’s church, Bermondsey. From 1814 to 1834, James and Elizabeth Murrell had probably sixteen children, most of whom died as babies or young children. By 1814, James and Elizabeth were living at Hadleigh, where their first child William Murrell was born, baptised, died and was buried in the space of one month. From her death certificate, it is known that Elizabeth Murrell died from inflammation of the chest, aged 49 years, at 10 pm on 16th April 1839. She was buried five days later in the churchyard at St James the Less. James Murrell is also recorded in the census returns for Hadleigh in 1841 and 1851 as a shoemaker. From the 1847 Tithe Map, it is known that he lived in a cottage in End Way, owned by James Tyrrell.  Murrell died from natural causes, at the age of 79 years, on 16th December 1860. On the death certificate, his occupation was recorded as “quack doctor”. He was buried on 23rd December by Rev. John Godson, the curate at St James the Less. James, Elizabeth and their children were buried in unmarked graves.