You are here: HomenextMain SubjectsnextPeoplenextLife as Head Dairyman on Hadleigh Farm Colony 1927-1944

Memories of the late Albert Guy 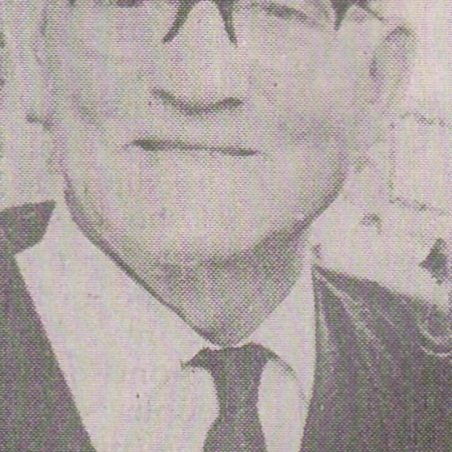 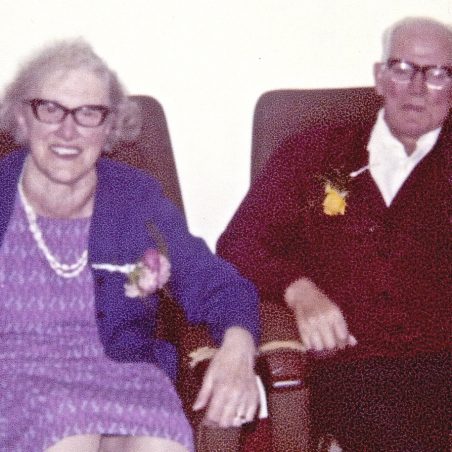 Albert Guy with his wife 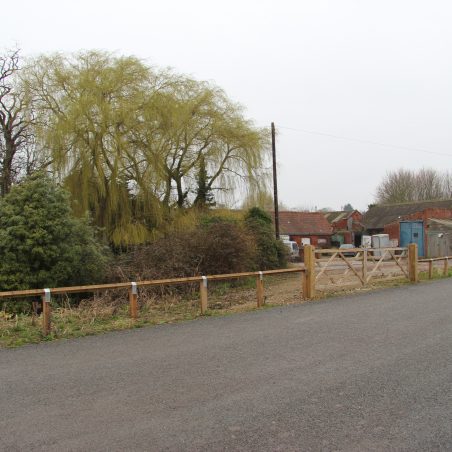 A view of the remains of the Dairy today with Sayer's Farm on the left.
Graham Cook 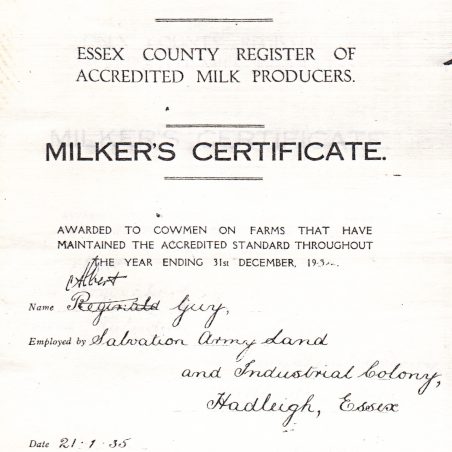 The Milker's Certificate awarded to Albert Guy in 1935.
via Graham Cook 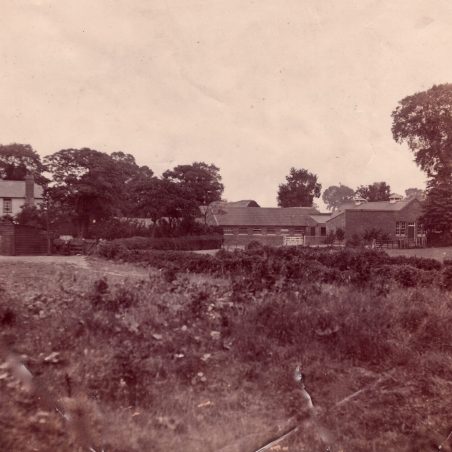 The following was written by the late Albert Guy, who was Head Dairyman on the Salvation Army Farm Colony from 1927-1944 and his memories have been passed to us by his grandson Eamonn Shelley. (Editor.)

My wife’s brother owned a shop in Kent and one day she showed me a copy of the War Cry (Salvation Army weekly paper) advertising for the post of Head Dairyman at the Salvation Army in Hadleigh, this was in 1927. I went for an interview  and afterwards was shown round the dairy where I found they had a herd of Lincoln Red, which was for dual purpose, beef and milk. I got the job, so came to Hadleigh in the spring of that year with my family.

The house assigned to us was No.9 Seaview Terrace, these were two blocks of cottages which had been built after the First World War. The Governor at the time was Commissioner Allister Smith and his wife, who often came round and helped my wife out financially. From the cottage it was a 10-15 minute walk to the Dairy at Sayers Farm and I had to leave at 5am each morning to get the cows in for milking, then return at 5pm, sometimes returning if the cows were sick.

We lived there for five years, then moved to a cottage near the Dairy in Chapel Lane. These no longer exist, as the site is now Abbeyfields Care Home.

With an assistant we each had about 30 cows to milk by hand and bottle about 10 gallons of milk for use on the Colony each morning, the rest was sold.

In the summer we used to turn the cows out in the field then had breakfast, some might be calving so we reared all the calves ourselves, both bulls and heifers.

The Government were trying to improve standards of milk production and local authorities would hold competitions  for good work. In 1927 we was awarded a Certificate of Merit for Milking and a First Class  Certificate for milk production from the West Sussex Council Agricultural Division. Also a certificate for maintaining Accredited Standards of Milk Production from the East Anglian Institute of Agriculture (Chelmsford).

At the bottom of the Colony, beyond the Dairy, was a brickfield where about 200 men from London worked, they were down-and-outs, it was a place where people came to get started and then hopefully go on to get jobs.

At the time I joined the Colony they were training boys aged 14-18 for opportunities overseas part of the Emigration Scheme. The boys who came were allocated to different departments for a few weeks at a time; The Dairy, Piggery, Nursery Gardens and outside on the farm and were instructed in the different types of work a few at a time, the boys stayed for about three months.

I had never been in a situation before where I had to teach youngsters and I had about five boys each day, as well as the assistant to help with the cows. I tried to pass on what I had learned.

The boys never arrived until eight or nine o’clock by which time the milking was over. I used to give the boys instructions in feeding and handling cattle, they also worked keeping the building clean and getting feedstuff in, washing and sterilizing and seeing to the boiler. Occasionally I tried to give them lessons in butter making;  we could only do it in a small way but I showed them how to save the cream for a few days then make it into butter.

Many boys passed through the Colony in this way and during their stay the Government Official would come and give them a medical and an intelligence test. Out of 300-400 perhaps a few did not pass to go overseas.

The boys who came here were from towns and had no previous knowledge of farm work but they were keen to go to the Colonies and after a while in their new countries, many had their own farms and we often received letters saying how pleased they were with what they had learned.

This training scheme went on until 1939, then the war came and emigration was stopped, the boys still here were sent back home and we had to carry on as best we could with the men living at the colony.

The Salvation Army bought another farm in Hertfordshire where they were going to move the herd and everything, but the government said they must stay. We were right in the middle of a big military camp with Ack Ack Guns at the top and the place surrounded by barbed wire. We got on fairly well with the bombs that dropped around us, one bomb fell in a field by Chapel Lane and the roof of our cottage was blown off, so we had to sleep downstairs with a tarpaulin over the roof. I carried on as best I could, it was a bit uncomfortable when the gun firing was going on but the cows were alright.  We managed to get through to about 1944, bringing our family up in Hadleigh while the war was on.  As I look back, I think to myself this colony was flourishing and go-ahead;  the whole place was kept tidy and plenty of people were employed here, good workers.  We did not get big wages but as far as I could see it was a happy and contented place.

I left the Colony in 1944 at the age of 70. While living in Parkfields, the Dairyman at the Colony was taken ill and I was asked to stand in for a month, I was surprised I was able to get back into the working routine.

During my stay I never made a fortune but I had a happy time and got on reasonably well with everybody.  In retirement at Abbeyfields I am living back at the spot where I was in the 1930s.

Albert passed away in 1989 at the age of 95. His funeral service was conducted at the Salvation Army Hadleigh Temple Corps by Major Gordon Stacey. Among the congregation were some of his workmates from the Colony, including  former Farm Manager Peter Howard and his wife Mildred. (Editor.)