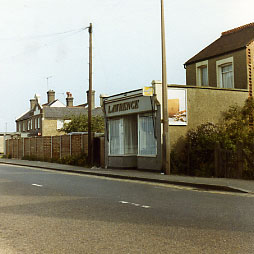 zoom
Sweet and card shop in the High Street

I was born in Hadleigh in 1937.
I can remember the ‘tank traps’ and metal studs that were put across the road in front of the Wagon and Horses pub. On the footpath they were more like large inverted pudding basins made of cement/concrete.
Going towards the Fire Station there was an emergency pool of water on the right by the entrance to Florence Gardens, adjacent to the footpath, but not above ground, more at ground level separated by a fence from the footpath – to stop boys like me and my brothers from getting in, maybe!?

Just beyond the Salvation Army buildings there was a shop – Lockwoods I think – that sold carpets etc, and Mrs Lockwood was a teacher at Hadleigh School.
Opposite the Fire Station Mr George had the Bakery; there was a sweet and tobacco shop run by a Mrs Jones further down. Later on Mr Bob Banbury took the shop over.

Next door was Tom Reynolds Scrap Yard and further along there was a fruit and vegetable shop called ‘Lowery’s’. On the other side of the High Street there was Lawrence’s shop that also sold sweets! I can remember the two ladies who lived and worked there.
After the War, word went round that Lawrences were selling fireworks, so next morning, quite early, my sister and I were first in the queue when the shop opened – but all they had were coloured matches, quite a disappointment and certainly not as good as the fireworks we were expecting!

Brackins Dairy was on the right, and on the left of the High Street was Dossett’s Cake Shop where we used to sometimes buy 1½ d Fairy Cakes for our mid morning school break.
I also remember the Post Office, but that’s about it!
I’m sure there will be other contributors who will be able to fill in the blanks?