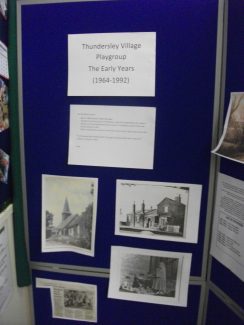 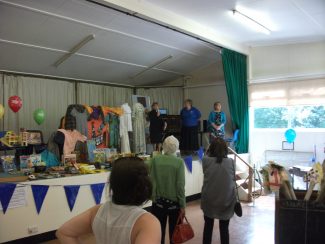 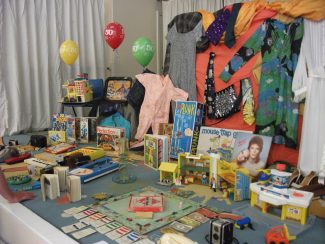 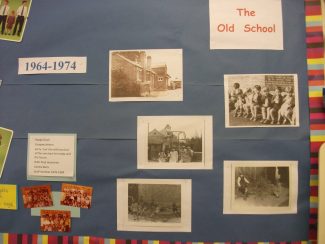 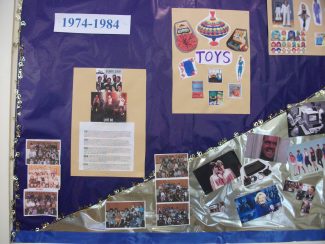 On Sunday 7th September 2014, the Pre School held a fair at St Peters Church Hall to mark the 50th anniversary of the start of the playgroup.

It was started in 1964 by Pat Ingram as the Village Playgroup near Kenneth Road in the Old School Building, Church Road (that used to be opposite Thundersley Clinic).

The group, managed by Lorraine Stamp, is still going strong and now has 38 youngsters aged between two-and-a-half and five.

The anniversary event was opened by Rev. Marian Sturrock, Rector of St. Peter’s and St. Michael’s

The celebration contained lots for the current and recent children with a bouncy castle, face painting and some competitions. The usual tombola and raffle were held to raise funds and an extra donation cheque was passed over that will go to helping improve even further the preschool’s outdoor area.

One display, on the stage, which attracted a lot of attention was all the clothes, toys and games from the 1960s.

There were various displays of pictures and information from the group over the five decades, mostly supplied by many of those who have worked there for many years. Before the event there was a plea in the local press to find the original organisers so that as much as possible of the early history could be retraced.

To quote Lorraine Stamp from her earlier interview, “The story I’ve been told is Pat (Ingram) was a teacher and had a child. Because she was used to being so busy she felt isolated at home, so she started the group for other local mums.”

In the 1970’s the playgroup moved to St Peter’s Church Hall and St Peter’s Church took the group under its wing in the Eighties, formalising it as a business with committee members. Lorraine said, “I started in 1995 after sending my littlest to school. I thought it would be a good way to get back into the swing of things, and I’m still here.”

I hope that this article may also prompt some of the older photos and stories to be submitted for publication on the Hadleigh & Thundersley Community Archive, both as individual comments and an article providing a fuller history of the pre school.