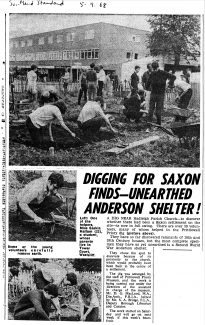 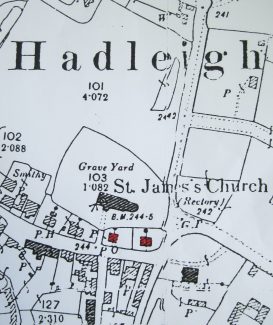 zoom
The two cottages are marked in red 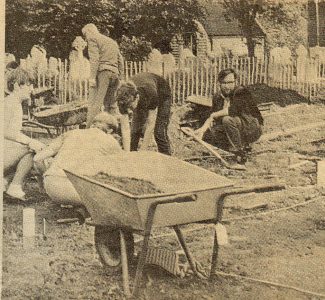 In September 1968, an excavation was carried out on the site of two demolished cottages, situated to the right of the path leading to the church of St James the Less.

It was carried out by 30 volunteer diggers under the direction of L.Helliwell and D.G.Macleod of Prittlewell Priory Museum.

The cottages had occupied the site in 1799 and close by was the Turnpike Road leading to Prittlewell.
The “finds” discovered far outweighed the expectations of the site directors and told of a history of Hadleigh dating from the Iron Age to the 16th century.  There was an early Iron Age burial, an antler shed by a red deer, then a medieval building which was probably tiled and contained a hearth of vertically placed tiles.
Most interesting was the discovery of a ditch and rampart which could indicate that Hadleigh was a fortified village, the ditch surrounding our Saxon Church, possibly from the time of King Alfred. (Not too far-fetched with the Danes just down the hill!)

Were you there?
Did you take part in the “dig” that August Bank Holiday week in 1968?
You may remember that it poured with rain on the last day!

Here is a transcription of the original Provisional Report.