An Article from The Leigh Times 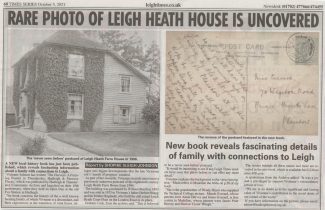 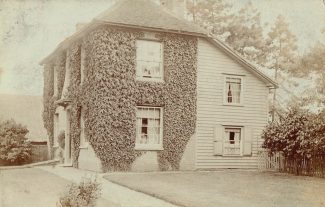 A report by Sophie Sleigh-Johnson was published 5th October 2021 in The Leigh Times about Vivienne Salmon’s book “The Harveys: A Farming Family in Thundersley, Hadleigh & Faraway Places.

The book was launched by the author signing copies during the 12th September 2021 Heritage Open Day at Hadleigh’s Old Fire Station which coincided with our archive’s 10th Anniversary.

As the report in The Leigh Times makes clear: “Vivienne recently uncovered a previously unknown postcard of the eighteenth century Leigh Heath Farm House from 1906.

The building was purchased by William Booth in 1893 and was sold in 1933 to Vivienne’s father Herbert Bragg and his brother Reginald, who built the still extant Leigh Heath Court Flats on the London Road in its place.”

There are an amazingly large number of connections between members of the extended Harvey family including the Yeaxlees, the Joscelynes of Joscelyne’s Beach fame and many others.

The geographical connections stretch from Hullbridge through Eastwood to Thundersley, Hadleigh, Leigh, Southend and Foulness.
And then far beyond these shores to Canada and the USA.

As an editor of the archive said: we are in no doubt as to the significant and lasting value of Vivienne’s contribution to the social history of our corner of the world.

Here is the link to the general article on the book and to the purchase connection.