You are here: HomenextMain SubjectsnextPeoplenextThe Heber Family of Hadleigh Hall

The Heber Family of Hadleigh Hall 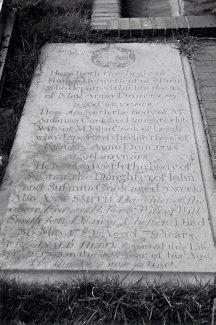 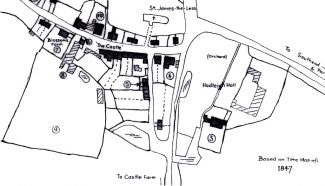 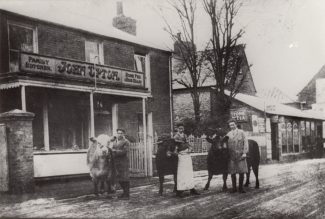 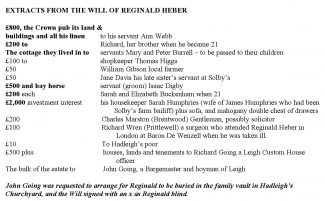 The oldest tomb in the graveyard of St James the Less is that of the Heber family.     Who were they and where did they live?

They could have originated from Yorkshire where certainly one member of the family remained. Quite possibly Thomas and Ann Heber lived at the large farmhouse/mansion of Hadleigh Hall, since it had been built around the mid 1600s. It is known that Thomas Heber was a churchwarden at St James in Hadleigh in 1693, the year his wife Ann died, and that he had a family comprising two sons, Reginald and Francis, and one daughter, Margaret.

Reginald went on to live in London and became a Merchant. His daughter, Margaret, married a Mr. Pratt and Francis continued at Hadleigh Hall as a landowner and gentleman farmer. In the village church in 1701, he married Margaret Oxley, who probably came from Thundersley. Francis is also mentioned that same year when he was brought to court with two other Hadleigh men for not paying the Chief Constable of Rochford Hundred the sum of £1.11.6d. ‘quarteridge’ money. Details were not given but it is likely that the village had a valid reason for withholding payment of the County rate.

Whilst living at Hadleigh Hall, Francis and Margaret had at least seven children, but sadly their first three died in infancy: Thomas, Mary, Ann; Susannah, Reginald, Ann and Thomas.

Francis’ son, Reginald, was only 10 years old when his father died in 1719. He was to be cared for by his mother, Margaret, who was to oversee their home, Hadleigh Hall, and the education of her children until they became of age. Only three children seemed to have survived, Reginald, Susannah and Ann.

Their large farm house/mansion lay someway back from the main Turnpike road to Southend, not far from the Church. The property was capable of housing ten servants apart from the bedrooms for the owner’s family. It was described in 1822 when this freehold mansion was up for sale, as ‘adjacent to the turnpike road in the pleasant village of Hadleigh, a short distance from themuch frequented bathing place, Southend’.

The house contained seven bedrooms (some with dressing rooms and closets), drawing and dining rooms, a breakfast parlour and a water closet. In the basement were the housekeeper’s (or butler’s) apartment, kitchen, larder, servants’ hall, scullery, wash-house, wine and beer cellars and a coal house. Water was supplied from a well. Within the grounds was a coach house for a four-wheeled carriage and a gig, stalls for six horses and a productive kitchen garden. The 16 acres of pasture land surrounding the buildings were exclusive of the yards, gardens, shrubberies and pleasure grounds. The lane was often lit up in summer evenings by glow-worms. The long lake, known as ‘the moat’, was lined with trees and separated the mansion from the lane. This lane was rarely used because the main route to the castle had been via Endway. Even as late as the 1930s, the initial section of Castle Lane was still no more than a cinder track.

Their Lodge house was on the corner of the Castle Lane, and later became a gentleman’s residence. With its parlour and dining room, it had servants’ accommodation plus two bedrooms and a closet.   Although there was only a small garden to the front, its rear garden contained its own well and pump. Beyond the garden was the yard containing folding gates leading to a brick built wash house, two stalls, stable and chaise house, with a loft and store room over. By the 1800s, the Lodge was the home of Mr Henry Wood when he retired from farming having left Hadleigh Hall and Solby’s to his sons to run. Several butchers’ shops occupied the premises during the 1900s and in more recent years it became a kitchen/bathroom shop.

The lodge has been used in many ways and was until just a few years ago, believed to be haunted. The ghost was apparently friendly and probably the same one spoken of by the villagers of old, being the elderly grey-haired lady from the churchyard. In the time of Gallaghers’ butchers, their dog often greeted the ghost, and the owners also heard her walking upstairs. In recent years she has often visited the hairdressers shop opposite the Church to move things about and Paul Newman’s shop to frighten one of his tenants; she was just looking at his medallion which she held above his chest during the middle of the night; well, it was a sovereign.

From Hadleigh Hall there was an uninterrupted view for miles across the estuary, which would have completed the setting. For the rich, life in Hadleigh must have been idyllic. Reginald (Francis’ son) could attend the mid summer fair held each year in the village, visit the weekly Wednesday market which enabled the local people to sell their goods and buy local farm produce, ride one of the horses over the downs or travel to nearby villages in their horse and carriage. In his adult life, Reginald became a gentleman farmer as well as a Churchwarden, following in his grandfather’s footsteps. In 1768, he purchased the Solby residence for his sister, Ann, who lived there in her latter days, possibly after her husband’s death.

Reginald became blind in his old age but was helped by his staff and the village people. He was the last of the Heber family to live at the Hall and died in 1793 at the age of 84 years. His will was interesting for it thanked, with various gifts, his friends, staff and the villagers. The remarkable amounts given to his servants set them up for many years as a middle class family could then exist on £50 a year.

Thomas Higgs was an early shopkeeper in Hadleigh, possibly a baker, as well as a wheelwright and farmer at different times. He apprenticed an orphan child from South Benfleet in 1741, and in 1792, as mentioned in Reginald Heber’s Will above, was left £100. With his windfall, he purchased Blossoms Farm House in the High Street.

During the 1840s after Reginald’s and John Going’s death, Hadleigh Hall was pulled down and a new smaller house was built nearer to the main road. This was completed during the time the Wood family leased, and later owned the property, quite possibly when Henry Wood moved into the Lodge House. It was purchased by the Salvation Army during the 1890’s, but they are both other stories …