You are here: HomenextMain SubjectsnextPeoplenextA Visit to All Saints Church, North Benfleet

A Visit to All Saints Church, North Benfleet 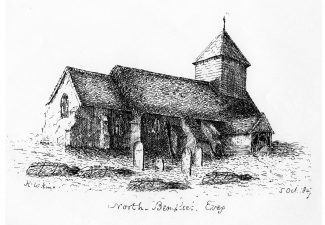 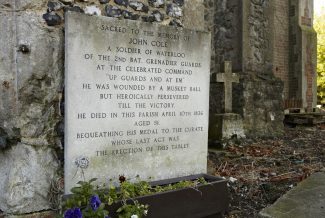 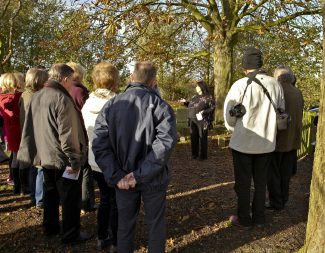 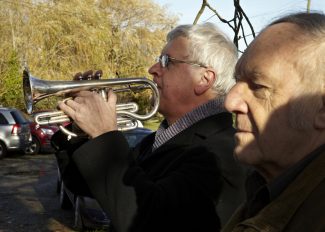 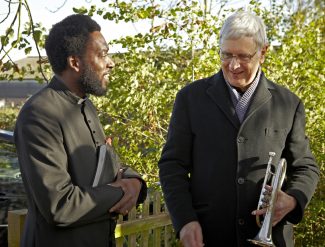 zoom
David Hurrell and the Rev. David Ibiayo who held the service
Photo by Tessa Hallmann 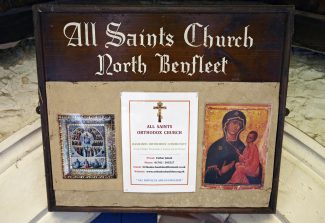 A VISIT TO NORTH BENFLEET
On a golden November morning (14 November 2018) an autumnal leaf gently dropped into my hands while we stood to attention in the churchyard of All Saints Church, North Benfleet, remembering John Cole, a veteran from the Battle of Waterloo, who was buried thereabouts, still carrying a musket ball from the battle within him. Was that falling leaf a reminder of the transitory nature of life?
Artist musician David Hurrell’s bugle played a fitting ‘Last Post’ and the Rev. David Ibiayo led the reading and prayer once author Rose Griffin-Twidell had informed the attentive gathering about the life and circumstances of the warrior. A plaque put up by his former regiment, the 2nd Battalion Grenadier Guards, stands by the church door. It replaces the original stone, which had been set up by the then curate with money raised from the sale of the deceased’s medals.
After the short ceremony Father Jacob of the Greek Orthodox denomination who now keep the abandoned church in use, allowed us to traipse all over the inside of the small church with its many iconic portraits of Christ and saints so popular in that culture. It was most encouraging seeing so much historical interest.
A drawing of ‘North Bemfleet’ church (dated 5 October 1847) and supplied by historian Fred Shaw is almost unrecognisable from today’s crumbling edifice, which seems to have been considerably altered, secured and enlarged in the meantime. Buttresses and the bell turret are missing and a stone tower has been added, an addition that today provides problems, as it seems to be moving and separating from the original building.
The very spelling of ‘Bemfleet’ places it before the arrival of the railways in South Benfleet when the spelling was changed from Bemfleet to ‘Benfleet’.

NORTH BENFLEET HISTORY EXCERPTS
North Benfleet on its high ground was, as the name implies, originally related to South Benfleet. Benfleet means trees by a stream or creek, a description of what the early Saxon settlers found by a creek opposite Canvey Island. Its first mention is as ‘beamfleote’ in the Anglo-Saxon Chronicles. I have no proof of this, but it seems feasible that when villagers settled inland they simply took the name with them. Quite possibly they were refugees from the Vikings who’d established a military camp in their old home in about A.D. 893, only to be overcome, burnt out and scattered by fledgling fighters of King Alfred’s. Old maps still show a connecting road from South Benfleet via Tarpots and Rushbottom Lane north to North Benfleet and on past Great Fanton Hall. (Fanton means ‘farm on the marsh’.) The two villages have been called Little Benfleet and Great Benfleet and in Latin Benfleet Parva and Benfleet Magna.

FRANCIS CLERKE LL.D., ‘RECTOR OF NORTH BENFLEET’,
THE HUMOURIST WITH THE YELLOW BED
In the 18th century (actually since 1696) it fell to petty constables ‘to return annually to Quarter Sessions lists of men between 21 and 70 qualified to serve on juries at Assizes, Quarter Sessions, etc.’ The Clerk of the Peace then copied them into a ‘Freeholders Book’. Liability for jury service fell to men with ownership of freehold or copyhold lands worth at least £10 a year. From 1730 it also included long-term leaseholders with property of a yearly value of £20 or more. The earliest Essex Freeholders Book of 1734, although not fully comprehensive, gives a good indication of the important men in an area.
Among the Freeholders of 1734 in North Benfleet we find Francis Clerke LL.D., aged about 47. He is mentioned as the owner of a £15 estate in Debden. In his will Francis Clerke described himself as ‘Rector of North Benfleet’. Doctor Clerke at one time held the positions of Chancellor of the Diocese of Chichester and Commissionary of the Deaconry of Lewes. Despite these positions both being situated in Sussex, he also held South Benfleet of the Dean and Chapter of Westminster, besides Bonvilles in North Benfleet.
The road between his two spheres of influence – North and South Benfleet – must have left a lot to be desired, for the Sessions Roll of Michaelmas 1712 reports an indictment of ‘the highway in Bowers Gifford, Thundersley and South Benfleet, leading from ‘Buers Gun’ to the church of South Benfleet, three miles in length and a yard in width, from 1 October to the date hereof, viz. 7 Oct., was and is broken, dangerous and out of repair, and the inhabitants of all three parishes ought to repair it.’ Witness was Francis Clerke. [Appeared. Confessed. Fined £50.]
This Dr. Clerke was a writer of doggerel. A letter memorial epitaph to his predecessor as rector of North Benfleet, the Reverend Joseph Hazwell, was inscribed on a long slab, which the good Doctor placed on a reredos over the altar of North Benfleet church. Later however, the Archdeacon had this removed to the north wall:-
‘From tyes of kindred quite removed
Mankind alike our rector loved.
‘He underlockt his flock, not fleeced ‘em
Content with nought but what best pleased ‘em
And what he took, resolved to spend
Upon, or give them at his end.’
(Following Wednesday’s service – 14 November 2018 ¬– I tried to find the ‘inscribed long slab’ in the church, alas to no avail. Perhaps someone else will have more luck? RH)
Another example of Doctor Clerke’s humour appeared on a now missing tombstone in South Benfleet churchyard, erected to the memory of James Mathews, an old hoyman, farmer and churchwarden who died on 4th July 1728. His epitaph, also composed by Dr. Clerke, was emblazoned with a stork on a gold or yellow background and read:-
‘Sixty three years our hoyman sailed merrily round,
Forty four lived as parishioner when he’s aground.
Five wives bore him thirty three children enough,
Land another as honest before he gets off.’ *
In his will Dr. Clerke describes himself as ‘Doctor of Laws, Rector of North Benfleete’. He left Bonvilles, his North Benfleet farm, to his cousin Ann Bate of Stock, spinster, together with his ‘yellow bed, chairs, looking glass, plate, watch, ruby ring set with a diamond, his own picture and that of the Duchess of Cleveland’s’.
The South Benfleet farm he left to his sister and her husband with instructions to have the chancel of the church there laid out in marble, to buy an organ and to set up a £30 annual salary for an organist.
Doctor Clerke departed this life on 31 October 1734, aged 50 and was buried in South Benfleet church. Stipulations to the employment and choice of the said organist brought John Christian Mantel over from Erfurt in Germany, apparently with the help of composer George Frederick Handel. The background has been researched and the connection has been accepted by authorities of baroque music.
When J.C. Mantel began publishing his own compositions, ‘Miss Bate’ appears among the list of luminaries who were subscribers to his music, among names like ‘Mr. Handel’ and ‘Dr. Pepusch’, the composer of the Beggars Opera.
On 4th February 1738 G.F. Handel’s opera Faramondo was published and a Mr. Mantel, Organist, was one of the subscribers. In turn Handel was, in 1743, a subscriber to John Christian Mantel’s published Six Setts of Lessons for Harpsichord or Organ on which, in fine copperplate, the composer is described as ‘Organist of South Benfleet in the County of Essex’. Publication of his Six Violin Sonatas followed and, probably in 1752, his Six Organ Concertos.
Benfleet’s organist composer moved on to Great Yarmouth in 1748, where he died aged 55 on 28 December 1761, aged 55 years.
Thomas Hurst, B.A., followed Francis Clerke in North Benfleet.

*When Daniel Defoe made his Tour through the Eastern Counties of England in 1722 he commented on the unhealthy marshlands where he had encountered farmers who’d had 5, 6, 14, 15 or more wives. The traditional marshland disease, the ‘ague’ (intermittent fever) was blamed on the rapid demise of the spouses. Sixty years earlier, the area of Laindon was known as ‘kilpriest country’ on account of the deathrate of its curates. That time malaria was blamed. The rector of Laindon-cum-basildon in 1663, John Pell, had to replace six curates in sixteen years. It did not stop at men of the cloth. He also lost his wife, servants and grandchildren to the disease.

North Benfleet’s 500-year-old Hall stood close to the church and used to be surrounded by a moat. It was demolished in the early 1940s. Rumours of foul play prevail. In the 15th and 16th centuries the Tyrells were the manorial family. The church of All Saints dates back to 1200.
On a visit some years ago I found North Benfleet church in a bad state of neglect, with a bad crack in a wall.
A memorial tablet beside the 16th Century porch tells the tale of heroism: ‘Sacred to the memory of John Cole, a soldier of Waterloo, of the 2nd Battalion Grenadier Guards. At the celebrated command ‘Up Guards and at ‘em!’ He was wounded by a musket ball, but heroically persevered ‘til the Victory. He died in this parish, April 10th, 1836, aged 51, bequeathing his medal to the curate, who’se last act was the erection of this tablet.’ John Cole survived the battle in 1815 and died 21 years later with the musket ball still lodged in him.

[Ed:  the recently published  book The Choppens – The History of a Hadleigh Family begins at All Saints, North Benfleet. Follow the link to see how you can get hold of a copy]