You are here: HomenextMain SubjectsnextPlacesnext240th Anniversary of Chapman and André Map 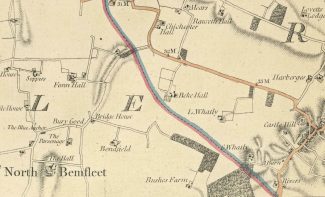 zoom
The area in 1777
Chapman and André 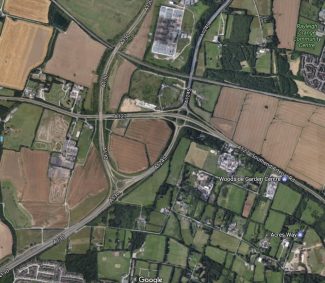 On the rural borders of Barstable and Rochford Hundreds,  the Chapman and André map of October 1st, 1777 shows North Bemfleet (sic) on Plate XVIII, a portion of which is shown here.

Somewhat North East of North Bemfleet, (as it was) south of Rawreth, between Rayleigh, Thundersley, the Blue Anchor and Little Whatly, in 1777 lay a quiet area of farmland, trees and pasture.  Both the map and the picture show the same area, which – 240 years later – now vibrates to the resonant frequency of high volumes of road traffic in a topological novelty called the Fairglen Interchange.

In February 2017, an extended consultation process was started to consider a redesign of this key road connection, possibly in two phases, to overcome current capacity constraints on traffic volumes and the resultant queuing, delays and unnecessary pollution that results.

Though the pictures in the attached 2017 PDF information leaflet show modest numbers of vehicles, it appears there are volume-related blockages at key times of the day;  no doubt these could become even more significant if the need increases sharply for ambulances to move patients to Accident & Emergency departments and between the related Chelmsford, Basildon and Southend Hospitals.