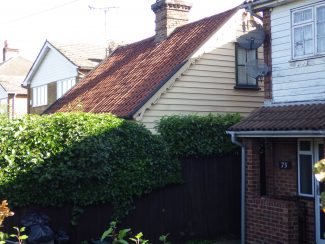 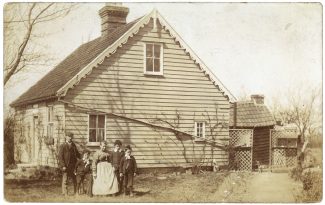 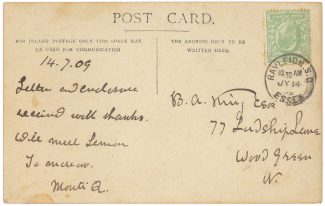 zoom
A reverse of the postcard
Peter Lewsey 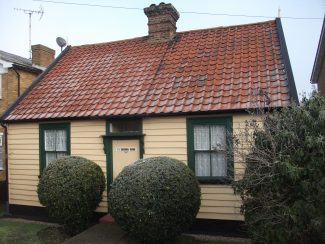 This cottage is one of the very few remaining timbered cottages left in Hadleigh. Remarkably, it doesn’t appear to have changed much, if at all, over the whole of the 20th century and fortunately, something is known of its history.

Spencer Welsh, of “Rayleigh Through the Looking Glass” writes: You will recognise the cottage ‘Montisdene’ as one of the last remaining old buildings (no. 73 London Road) opposite the Hadleigh Rec and Allotments, along what was once known as The Causeway.

The picture was taken more than a hundred years ago in 1908 and shows the family of my paternal grandparents, Thomas and Mary Ann Welsh with their three sons, Thomas (my father, born 1897), William and Louis”. All the boys were born in Southwark in London before the move to Hadleigh.

Louis, then 6, tragically later died during WW1, when run over by a dray when returning from a shift at a munitions factory, having been originally too young to enlist in the forces, but that is only one part of the Welsh family local history which may appear in other articles in due course.

Peter Lewsey’s copy of the reverse of this postcard is signed by “Monti Q”. Perhaps it was Monti who sold or rented the house to Spencer’s grandfather.

By 1911, the Welsh family had moved to Seaview Villas in Elm Road and “Montisden” was recorded as in the “High Road” and then occupied by the Stace family originally from Chelmsford, a couple of home laundry workers with 4 children at home.

The intrinsic heritage value of the cottage was recognised by the council as recently as 2013 when, after a recommendation from the Hadleigh & Thundersley Community Archive, it was added to the List of Local Buildings of Architectural or Historic Interest.

Unfortunately, it is difficult to establish exactly when the cottage was built. The changes in the road name and the lack of any earlier appearance of the house name in census records makes it difficult to track the building back any further. However, if you know any different or can identify “Monti Q”, please add a comment.