Another shot of Hadleigh Corner 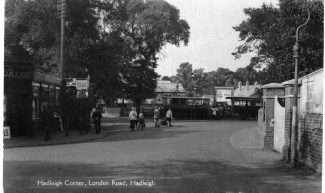 There is a lot to look at in this busy scene which was probably snapped between 1915 and 1920. Click on the picture for a much larger image to enjoy.
The two buses, the one at the rear belonging to Thundersley and Hadleigh Motors, waiting to be loaded, and judging by the basket being carried across the road by a man and a youth, they were going on an outing somewhere. In the left foreground are the Cingalee tea rooms, which we are told was a very popular rendezvous for the locals. (Later this became The Good Companions Café.)  Top left is the entry to Rectory Road and the picket fence is an amusing touch.

F. H. Norman’s garage is behind a large tree and his newly built bungalow can be clearly seen, although it was in Church Rd. Bottom right is the entrance to Hadleigh Hall with a letter box built in the brick pier. We are looking at all this from Castle Lane, we can see the sign, and the bloodcurdling poster informing us that the wages of sin is death!

On the far side across the road is a Salvation Army notice board advertising a concert of music and song, with somebody named Murray starring apparently. Someone might even know of this person? It really was a far cry from today.

{Ed:  Here is a later view of Hadleigh Corner, after the Kingsway was completed.}

For other topics, try “Search” on  the front page.