From an unusual viewpoint 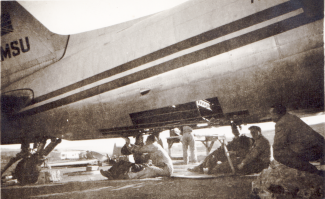 zoom
A view of the damage
Robert Nichols 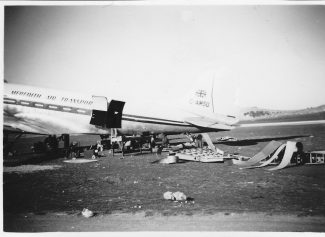 Shortly before Christmas 1952, one of six C47s (Douglas Dakotas) for which I had supervised the overhaul was chartered to Meredith Air Transport to fly a party from South Africa to the Holy Land for the Christmas festivals in the area then known as the Hashemite Kingdom of Jordan.

For some unknown reason, the plane overran the runway at Jerusalem ending in very rough terrain.  The main wheels passed  either side of a large hole but of course the tail wheel did not, causing severe damage to the tail plane and elevators and smashing a large hole in the rear fuselage.

The day after, I flew out with the Insurance Assessor to advise on its reparability. After inspection, I assured him that it was possible to repair on site.

On the 31st of December, I headed the repair team in another Dakota loaded with replacements and pneumatic drills and riveting guns.  Flying through the night I clearly remember watching the sun rise over the Judean Hills as we approached the coast of the Holy Land.

We stayed in a hotel in Ramallah; they brought us midday meals at the airfield so we could work every daylight hour.  Being winter,  the weather was quite cold, it even snowed a little but fortunately there was only a little rain.

In four weeks of intensive work, the repairs were complete and after a very welcome day of sight-seeing and with every confidence in our work,  the aircraft was loaded with all the equipment ready for the flight home.

First stop was Nicosia in Cyprus for refuelling,  then on to Malta through a very stormy night.  The maximum fuel was uplifted for the last sector to the UK which was on the limit of the aircraft’s range.

The date was 2nd February 1953 and from northern France, the low cloud base meant a low level approach to Southend Airport.  Being in the cockpit (watching those emptying fuel gauges ) I was astonished to see Canvey completely under water with just roof tops in view. It is a scene of devastation that remains very clear in my memory.  We landed at Southend and, whilst coasting to the end of the runway, the starboard engine stopped, for lack of fuel.