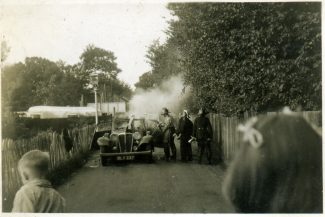 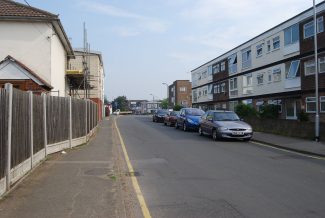 The photo was taken at the top of Castle Lane, on the right are the grounds of Hadleigh Hall {Doctor James} with a large pond at the south end. On the left is the Ruffles garden with the house on the corner of Castle Lane and Endway. Behind the trees was Gallacher’s the butchers with the disused abattoir, which was being used by Mr Gallacher to build a wooden sailing cruiser.

It is a pity that the old fire engine is not shown, it was the old Dennison with extending ladder on top. When the fire station was modernised, the Fire Engine was purchased by Mr Brittain, of Brittain Haulage Benfleet and shown in local carnivals and rallies. Wonder where the Engine is now. The car looks like an old Riley.