A place out of sight of the sea 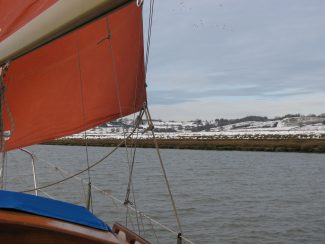 Daws Heath is a distinctive part of Thundersley, but it is not part of Hadleigh – though some feel that it should be – and each time I pass the village sign for Daws Heath I am a little perplexed.

Pausing, I gaze adoringly at a scene of my beloved estuary: the sign shows a wonderful view overlooking the lower end of the London River’s sea reach (The River Thames). However, I have found nowhere within the bounds of Daws Heath where the river’s silty waters can be seen. The Thames spritsail barge is a nice touch, but a great deal of artistic latitude is needed because the river is beyond the brow of rising land in neighbouring Hadleigh … or is there some magical spot I’m not aware of?

The Thames, barges and coastal sailing are in my blood. I was brought up on a sailing barge. I went to sea on big ships. The family’s barge was kept in sail for nearly three decades during a different barging era, long before the start of barge chartering – as seen at Maldon – so the sight of the sea is something that causes a flutter.

I’ve attached a view looking from the other direction, from out on the water. Only Hadleigh can be seen and then only its fringe… It is a view probably not seen by many residents. Down there is my magical place within Thundersley, Daws Heath and Hadleigh. The marshes, creeks and rills below Hadleigh’s downs are full of history. Its most recent was the enterprises carried out by the Salvation Army in brick and pottery making. But other things have long disappeared too, such as a mill, wharves and farms. It is a fascinating environment: I love it.

Look for ‘Essex Sailor’ on BBC Essex web pages – there is a little there too.

David Hurrell knows a little of the sign’s inception: perhaps he will relay this to a wider public.

{Ed: February 2021:  Those who know Nick, or know of him, might be interested to hear that Nick Ardley has been included in a hall of fame compiled by Yachting Monthly covering the first two decades of this century. Nick has blogged about this here .}